Trump on Clinton’s “basket of deplorables” comment: “She looks down on the citizens” 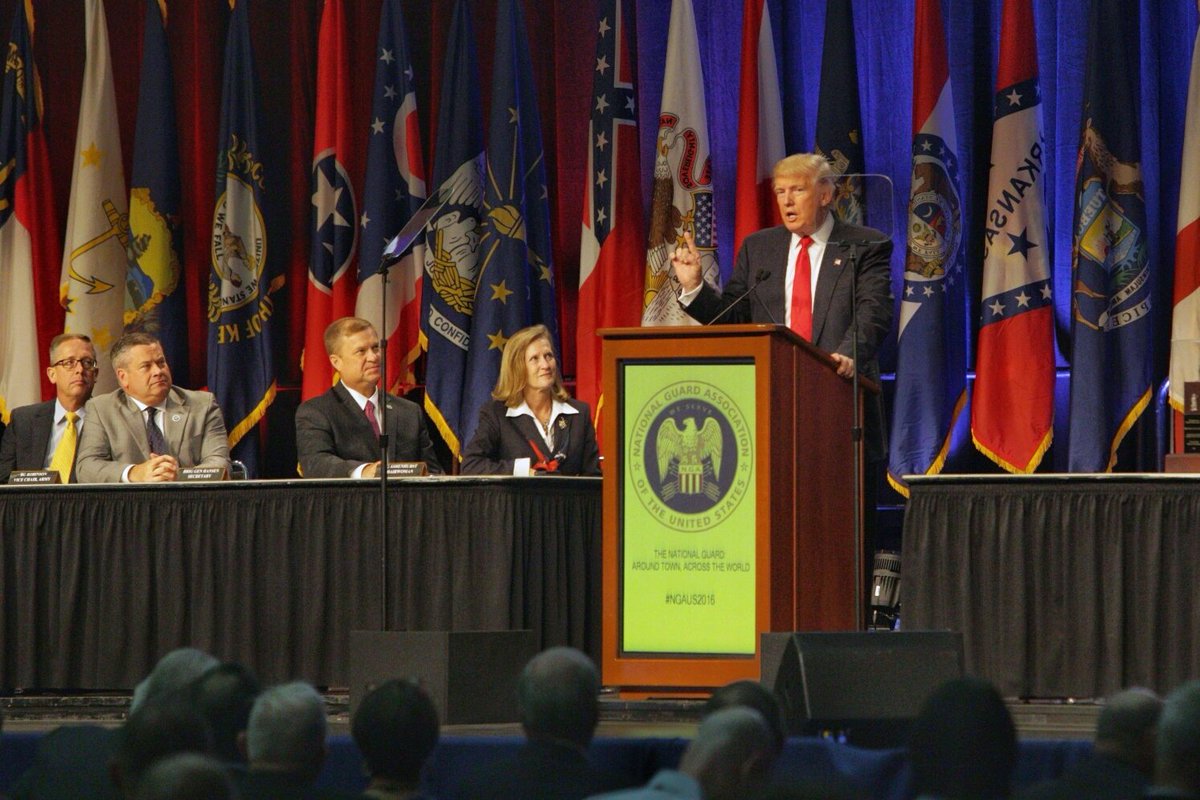 Republican presidential nominee Donald Trump commented on Democratic opponent Hillary Clinton’s “basket of deplorables” statement and appealed to his military supporters during his speech in Baltimore on Monday at the annual conference of the National Guard Association of the United States.

A slew of Trump supporters lined the streets outside the Baltimore Convention Center, where the annual conference was held.

The 15-minute speech began with an anti-Clinton push, focusing on her comments at a fundraiser on Sept. 9, when she said half of Trump’s supporters fit into a “basket of deplorables.” She accused Trump of lifting up this “racist, sexist, homophobic, xenophobic, Islamaphobic” group.

“She divides people into baskets as though they were objects, not human beings,” Trump said. “Hillary Clinton has revealed her true thoughts, she looks down on the citizens of our country.”

Trump went on to say he did not believe that his many supporters were “xenophobic” or “Islamaphobic.”

“People who warn about radical Islamic terrorism are not Islamaphobes,” Trump said. “I cannot see how she can campaign any further.”

Clinton posted a video to her Twitter account Monday in response to Trump’s comments from the conference on her having “such a low opinion” of American citizens.

“You can’t lead this nation if you have such a low opinion for its citizens.” —Donald Trump
About that. pic.twitter.com/pij0atGrgK
— Hillary Clinton (@HillaryClinton) September 12, 2016

The GOP nominee then shifted his focus to his campaign, adding that he was polling “exceptionally well” among Mexicans and Hispanic workers in the past few days.

While Trump’s popularity with the Latino vote has fluctuated, he still trails Clinton in the demographic 54.7-32.2 percent, according to the USC Dornsife/Los Angeles Times “Daybreak” poll.

Trump also promised members of the military he would guarantee them the best resources and equipment “that [the military] needs and deserves.”

“The National Guard will have a direct line to the oval office — and I mean direct,” Trump said.

Trump also stated that he plans to change policies to benefit all Americans and called for new military policy for a “major rebuilding” of the United States military. He promised that his campaign was the one that will deliver “for the people.”

“We will be one people under God saluting the American flag,” Trump said shortly before exiting the stage to a standing ovation.

But Trump supporters were not the only ones gathering in Baltimore. Maryland Democrats Rep. Elijah Cummings, Rep. Chris Van Hollen and Sen. Ben Cardin all gathered in front of Baltimore City Hall before Trump took the stage at the Convention Center to share their concerns about the Republican presidential nominee.

“We come here today because we want to remind America of exactly who Donald Trump is, and to remind them that we are at a very critical crossroads in our nation’s history,” Cummings said. “It’s interesting now that he’s going to address a group of voters who, because of their harmony, because of their working together, they have created the best military in the world.”

“Bottom line — he’s not qualified to be Commander-in-Chief, and he would certainly jeopardize America’s national security,” Cardin said.