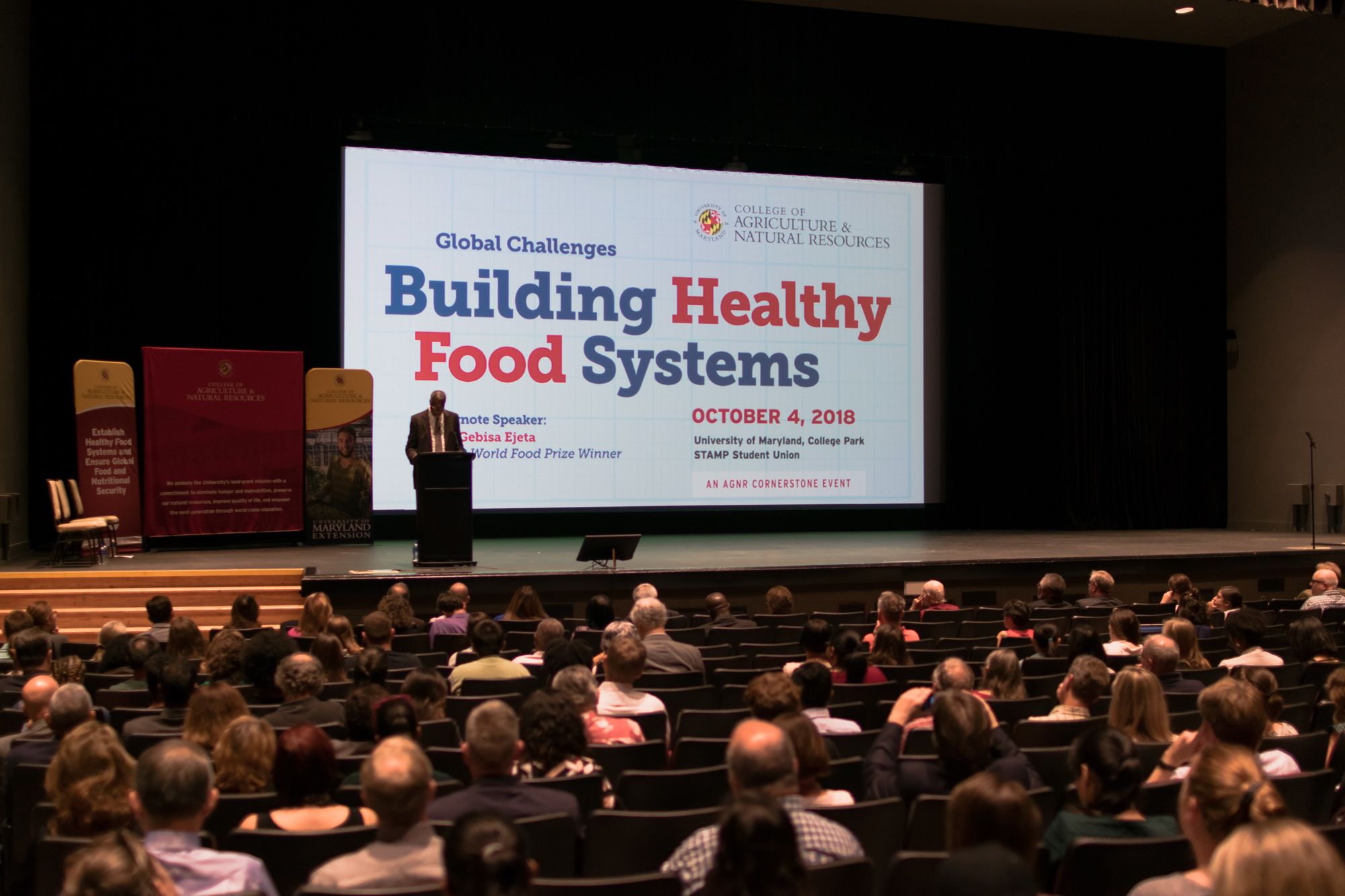 Dr. Gebisa Ejeta, 2009 World Food Prize Winner and professor at Purdue University, delivers the keynote address to begin the conference. He described how his personal experiences drive him to do the impactful work he does now.

In what organizers called a “cornerstone event” for a school that began as an agricultural college, the University of Maryland welcomed a World Food Prize laureate and food security experts from across the country Thursday to the Stamp Student Union.

The agriculture and natural resources college invited these experts to speak at an inaugural conference on international food systems.

It’s the first of an annual series that will be an amazing educational opportunity for students, said the college’s dean, Craig Beyrouty.

“I think that it really stimulates the juices,” he said. “It gets the intellectual thinking going. The students are the reason we’re really doing this.”

The conference, which was titled “Global Challenges: Building Healthy Food Systems,” featured a diverse range of speakers and panelists, including Gebisa Ejeta, the winner of the 2009 World Food Prize and the event’s keynote speaker.

Ejeta earned the award — an international honor recognizing individuals who have improved the quantity, quality, or availability of food in the world — for developing a sorghum hybrid that produces greater crop yields.

“I’m just a voice,” Ejeta said. “And my voice is advocating for science and technology and education and building capacity and strengthening institutions all towards my selfish agenda of fighting hunger and eradicating poverty.”

Roughly 460 people registered for the event, although the college expected about 600 attendees, said Samantha Watters, a spokesperson for the agricultural and natural resources college. The event was also sponsored by PepsiCo, she said.

During his speech, Ejeta addressed several challenges to achieving global food security such as population growth, food loss and waste, climate change and damage to biodiversity and ecosystems.

“These are existing challenges that are getting stronger and emerging,” he said. “Climate change, the crisis around water, the energy issues and global trade issues are emerging and will affect everyone globally.”

The vast difference of food security between developed and developing countries is also a major issue, he said. As a native Ethiopian, Ejeta said he’s experienced the differences firsthand.

“Food in the developing world is to fill empty stomachs,” he said.

With the global population projected to rise, global food demand will too, Ejeta said, and the world needs to seek science and technology innovations and create policy to face this challenge.

“I think we overdo this a lot, but we basically tell students and the younger generations that those before us have messed it up and it’s for your generation to clean it up,” Ejeta said. “Unfortunately, the world we’re leaving behind for you is not as nice as we received it.”

Shirley Micallef, a conference organizer and professor in the agriculture and natural resources college, said these are incredibly pressing times for food security, safety and nutrition.

“We all eat, but the world population is growing at a very fast rate and, at the same time, hunger is still a problem globally. Moreover, we are facing challenges that we’ve never had to face before,” she said, referencing climate change, food waste and energy usage.

Nine sessions followed the keynote address, featuring panelists from this university, the Food and Drug Administration, the United States Department of Agriculture and other organizations. Some session topics included nutritional and food security, sustainable production and water issues.

“We’re hoping attendees get a better sense on what’s involved in these issues and how complex they really are,” Watters said. “We hope that this will inspire students and build connections and partnerships that can help lead to collaborative science.”

Gen Li, a graduate student and plant sciences major who attended the event, said food production and crop yield are, in his opinion, the most important issues regarding food security.

“Since there’s so many different subjects at the conference, you can know more of the big picture and learn how to deal with it better,” he said. “I want to learn new discoveries and perspectives about food safety on a global scale.”

Micallef said she hoped the event can begin a conversation across several different fields because these issues are not one-dimensional.

“One thing that is apparent to me is that partnerships are important and they’re not as impossible as we sometimes think they are to get,” Micallef said.”I think having these types of events are really great for us moving forward because it incites some new excitements about starting collaborations or thinking beyond what you are used to.”