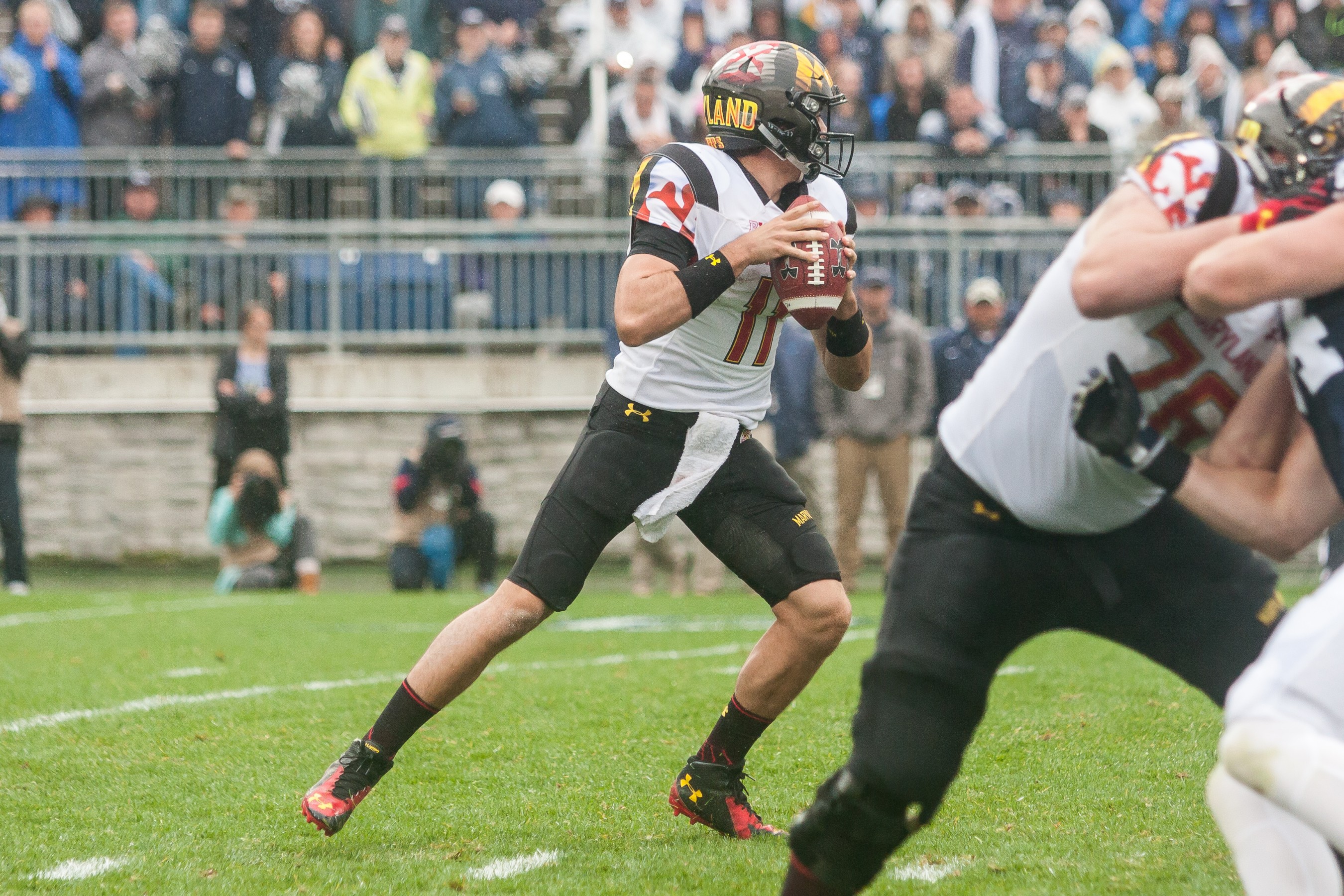 In the first four games of the season, opponents didn’t force the Maryland football team to stray from its ground-centric game plan.

The team racked up 1,200 rushing yards, twice cracking the 300-yard mark and never recording fewer than 239. Running back Lorenzo Harrison emerged as a freshman phenom, while Ty Johnson showcased his breakaway speed with a career day in the Big Ten opener against Purdue.

The duo flashed its presence in the Terps’ loss to Penn State last weekend, but the Nittany Lions limited the backfield’s impact to 170 total yards.

The offense, meanwhile, struggled to generate passing production, an aspect of the unit the coaches want to improve as the conference slate picks up.

“So, you keep running the ball, but when you’re in a situation when you’re forced to throw it or you need to throw it, obviously we’re not as far along in our development in that area of our game.”

Johnson posted the Terps’ longest play of the game, scurrying 66 yards along the sideline on a checkdown from quarterback Perry Hills to tie the game at seven midway through the first quarter.

Hills and quarterback Tyrrell Pigrome, in his longest relief appearance after Hills suffered a second-quarter shoulder injury, combined for 10 completions on 16 attempts for 100 yards. Excluding Johnson’s score, the Terps averaged 3.8 yards per completion.

In his weekly press conference Wednesday, offensive coordinator Walt Bell attributed the unit’s play distribution — 38 rushes to 16 throws — and stifled passing game to the Terps’ confidence on the ground.

He said that showed in the Terps’ play calls on first down. They rushed the ball 15 times compared to eight throws.

But Penn State, which ranks third in the Big Ten in passing defense and posed the most stout front seven the Terps had faced this season, didn’t allow the Terps to create shorter distances in later downs.

Maryland’s offense completed three of its eight first-down passes for a combined 11 yards. The other five plays ended with three incomplete passes, an interception and a sack.

The running game averaged about six yards a carry on 1st-and-10, and Harrison gained 26 and 44 yards on two of the attempts.

While the Terps surrendered four sacks, and Hills’ two turnovers came under pressure, Durkin didn’t place all of the blame on the offensive line. The first-year coach said the running backs’ reads, the receivers’ lack of separation downfield and the quarterbacks’ progressions also contributed to the breakdowns.

“We can effectively throw the ball,” Durkin said. “We’ve just got to do a better job all the way around — protection, routes, decisions, times to call passes, all of that.”

The team’s next test comes against Minnesota on Saturday afternoon.

Bell said the Terps will “overdo” everything in practice to work on all facets of their offense.

He expects the repetitions will help instill passing plans as Maryland prepares for a Golden Gophers secondary that ranks second-to-last in the Big Ten.

“The way coach Durkin runs his program, there’s always a sense of urgency whether you win or lose,” center Brendan Moore said. “It’s not an option.”