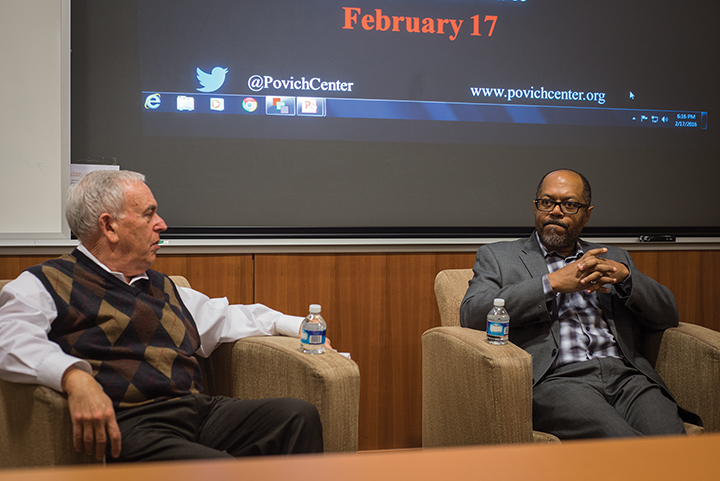 George Solomon, Director of the Shirley Povich Center for Sports, interviews Kevin Merida inside of the broadcast theater in Knight Hall.

Kevin Merida assumed his position as editor in chief of ESPN’s new publication The Undefeated in October. The publication aims to combine sports and society, intersecting race, sports and culture to build communities, he said.

On Wednesday night, Merida visited this university to speak to about 40 students and faculty in Knight Hall about the new publication as well as where the journalism field is headed. The discussion was sponsored by the Shirley Povich Center for Sports Journalism and was moderated by the center’s director, George Solomon, and journalism graduate student Rachel McNair.

Although he wasn’t part of the original inception of the site, Merida said he understands what he needs to do to make The Undefeated successful and revolutionary for readers.

“The idea behind the site was in part because African-Americans are a really important demographic to ESPN,” he said. “It’s an attempt to take advantage and serve this audience in a more sophisticated way with things that maybe ESPN is not doing right now.”

Merida said the team behind the site plans on focusing on some areas of sports that don’t get much attention elsewhere, such as black university issues.

McNair said Merida’s explanation of how The Undefeated is unique compared to other websites was the most interesting idea he talked about.

“What is going to make the site different and what is going to draw people to the site [is] being able to tell stories that other sports outlets aren’t telling,” she said. “Not a lot of people understand what athletes go through beyond the sport.”

Troy Jefferson, a graduate student in the journalism department, echoed McNair’s statements, saying Merida’s description of the publication’s mission was his biggest takeaway.

Journalism is expanding on social media, and it is important to be able to thoroughly investigate stories and find out what other people don’t want you to know, Merida said. It’s also a modern journalist’s job to understand the changing landscape of the industry through mobile devices, and to think of the ways to capture people’s attention in small windows and concise words.

Merida also addressed the difficulties that can come with launching a new publication.

“It’s the equivalent of starting a newspaper or magazine in a different era,” he said. “You have to build an organization, a structure, a process.”

While Merida said he understands The Undefeated will be compared to Grantland, an ESPN website that got shut down last fall, he and his team will focus on their own site separately.

“This is its own separate site that will be evaluated and tested on its own,” he said. “I hope that people who were fans of Grantland will be fans of ours, too.”

Merida said he hopes The Undefeated is unpredictable, something very difficult in today’s media, and he expects a lot from his staff to bring something new to the website daily.

“I will be fierce about having us to be both smart, but also really eclectic in a way that surprises people,” he said. “Every day’s a surprise, and not a day without swagger.”