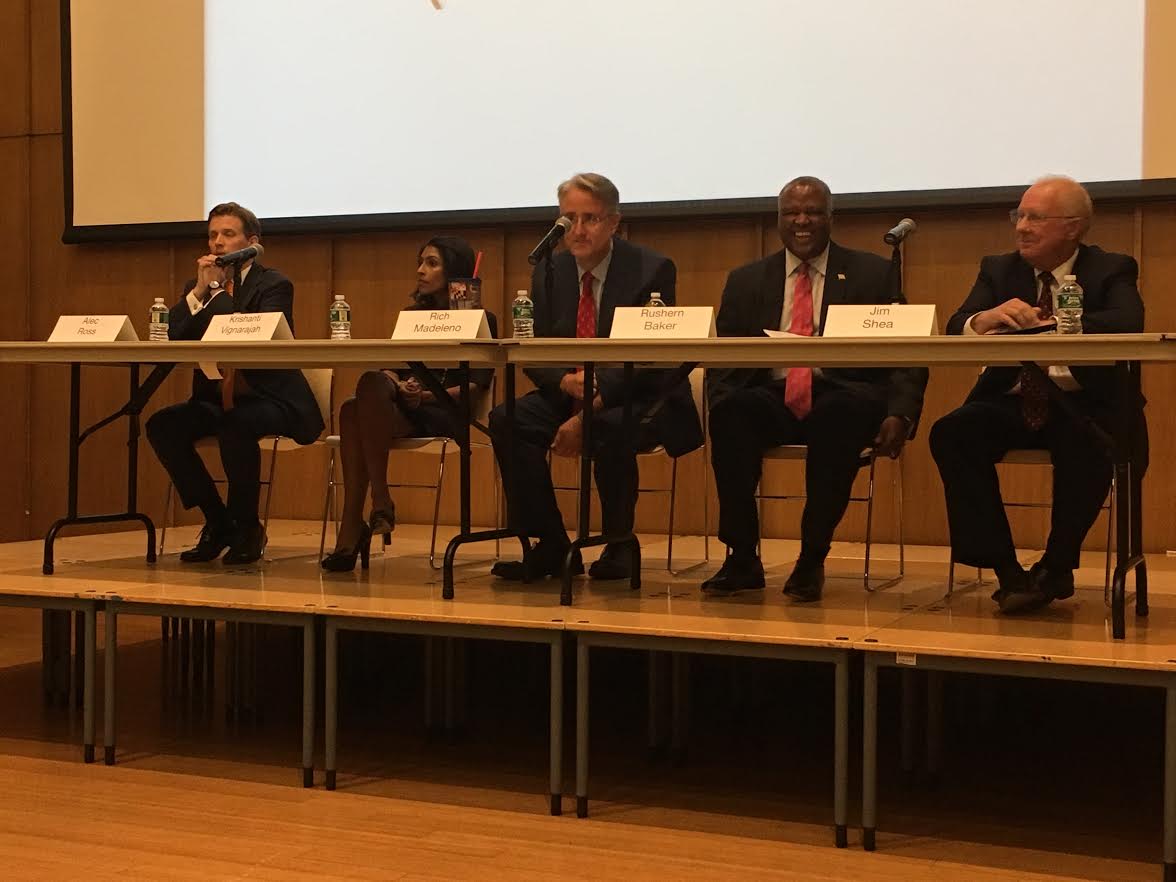 Five of the seven Democratic candidates for Maryland’s governorship discussed progressivism, minimum wage and campaigning at a forum hosted by Progressive Neighbors in Silver Spring on Monday night.

About 100 people attended the event, which included each of the Democratic candidates, except Ben Jealous and Kevin Kamenetz.

When it came to minimum wage, the candidates shared mixed opinions.

Maryland Sen. Richard Madaleno (D-Montgomery) said he supports increasing it to $15 per hour.

“No one should work full-time and still live below the poverty level,” he said.

“The number of people we have in the county who are working and can’t afford healthcare, can’t afford the quality of life, can’t afford housing,” he said. “That is one of the reasons we pushed through raising the minimum wage in Prince George’s County and Montgomery County, hoping to be an example for the rest of the state.”

Prince George’s County and Montgomery County each have an $11.50 per hour minimum wage.

Former Chair of the Board of Regents Jim Shea said the minimum wage lags behind the cost of living, which could negatively impact state residents.

“It puzzles me that everything else we’ve got goes up with the cost of living year after year, accelerating it seems, and yet the minimum wage languishes at the low level,” he said.

Krish Vignarajah, candidate and former policy director to first lady Michelle Obama, said while she supports a $15 minimum wage, it shouldn’t happen overnight. The increase should not cause employers to move employees from full-time to part-time jobs or turn to automated jobs, she said.

Glenmont resident Zach Wiita said he was sad that his favorite candidate, Jealous, didn’t attend, but the forum helped him assess the others.

“I walked in tonight actually being a Ben Jealous guy and Senator Madaleno is actually my state senator, I really like him a lot too, and he did really wonderfully tonight,” he said. “I’m gonna be very sad to see Madaleno leave the General Assembly. I definitely think he did the best tonight.”

Pam Stuckey, a Kensington resident, had already decided to vote for Madaleno before the forum but said the forum made her even more confident in her decision.

“I’m a giant fan of Rich Madaleno, known him forever,” she said. “So my decision is, I would say, made, but I also have to be informed about every candidate.”

Candidates also spoke on how they defined progressivism.

Alec Ross, a candidate and former adviser to Hillary Clinton, said he intends to display his progressivism prominently if elected.

“If I’m fortunate to be elected governor you’re going to know you have a progressive governor because when you drive into Maryland from Donald Trump’s Washington, D.C., [there will be a] sign that says welcome to Maryland you will be entering the resistance,” Ross said.

Vignarajah said a progressive is someone who believes everyone should have the same opportunities regardless of where they grew up.

Candidates at the forum also discussed how the Democratic Party can run a better campaign this time around.

“We are going to go out and campaign,” Madaleno said. “Not from Baltimore to Bethesda but from Ocean City all the way out to Oakland in far western Maryland.”

Ross was also critical of some Democratic campaign rhetoric.

“Our rhetoric and our policy over the last 20 or 30 years have been if you go to college, you’re a winner. You don’t go to college and you’re a loser,” he said. “When you want to understand why are all these people whose economic self-interests would be voting Democrat, but they’re voting for Trump … it’s because Democrats have done a very poor job of setting out a pathway for the skilled trades.”