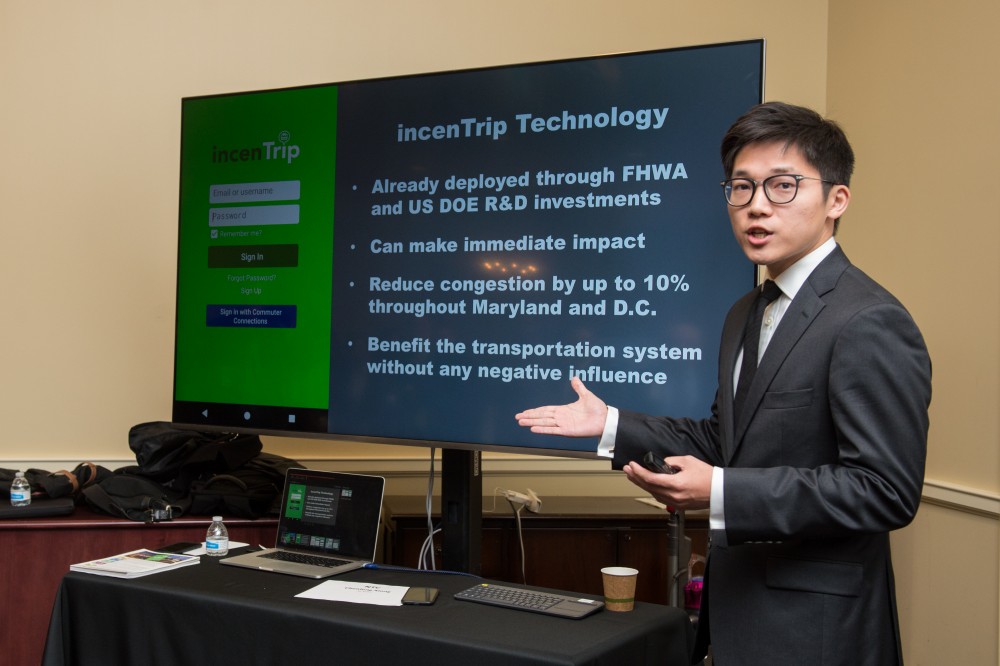 University of Maryland researchers at the Maryland Transportation Institute recently created a commuter app that helps users find the fastest and most environmentally friendly modes of transportation — and offers prizes along the way.

The researchers released the app, called incenTrip, in the spring, and it’s currently for commuters in the Washington D.C. and Baltimore region.

The app tracks commuters’ travel through a GPS function that logs points for each mode of travel. The greener the commute, the more points users get — points they can redeem for prizes such as gift cards.

The project, which began at the end of 2015, was funded by a $4.5 million grant from the Advanced Research Projects Agency-Energy of the Department of Energy, said Chenfeng Xiong, one of the lead developers and an assistant research professor in the civil and environmental engineering department.

The app has been in a “pilot period” since May to focus on data testing and controlling the number of users, said Lei Zhang, the director of the transportation institute and a civil and environmental engineering professor.

About 35 thousand people have downloaded the app, and there are a couple hundred active users a day, Xiong said.

Although commuter apps are not a new innovation, the app’s reward system, which is funded by different investors, is unique.

Commuters logged into the app can receive points that can eventually be redeemed for various prizes, such as a $50 App Store and iTunes gift card — which costs 5,000 points — and Amazon gift cards as well. In the future, more travel-related prizes will be offered, like E-Zpass credit, Xiong said.

Commuters begin by plugging in their destination and departure time. IncenTrip then generates countless different commute options — such as biking, walking, metro rides, driving and driving services— all with a range of point values.

Environmentally friendly commutes have higher point values than commutes that increase congestion and energy use. For instance, a trip from the University of Maryland to Prince George’s Plaza at noon on a Wednesday shows a driving option for 3 points, a metro ride for 87 points and a bike ride for 108 points.

“We can predict the travel time, energy use and emissions associated with every single mode across different travel times,” Zhang said. “We’re trying to optimize and personalize incentives to nudge travelers to make smarter commuter decisions.”

With these central goals in mind, Zhang also encourages commuters at this university to download the app.

“We can help everybody enjoy their commuting from the University of Maryland more and have the entire campus become greener,” Zhang said. “It provides students many different things and they can earn rewards by making the campus more sustainable.”

Ambika Narula, a junior journalism major and commuter student, takes the University of Maryland shuttle from Gaithersburg to get to and from the campus every day. Due to infrequent bus times, she said it can be stressful and would “definitely” want to download the incenTrip app.

“I think that way I could see what alternatives there are for commuting,” Narula said. “It’s a really good idea that saves the environment.”

Narula also said the reward system is a cool feature and compared it to Pocket Points — an app that rewards students for staying off their phones in class — which she and her friends use for discounts and deals on the campus.

IncenTrip is already being developed in other cities and areas throughout the country and the creators are looking into making it available internationally, Zhang said. Xiong and Zhang said they are both excited for the app’s potential.

“As a university researcher, it’s a little bit different to what we’re used to — we publish papers, we teach, we do public service,” Xiong said. “Now, we’re trying to run an app. It’s a brand new challenge for faculty members like me.”