“The sky’s the limit”: With a rough stretch behind it, Maryland gymnastics is thriving 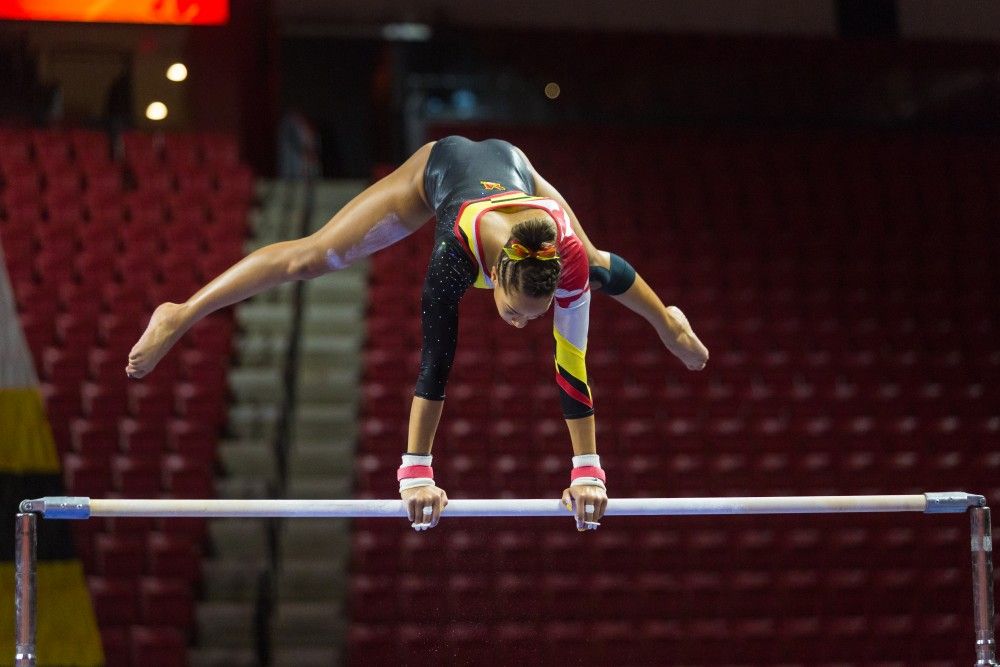 After the Maryland gymnastics team’s disappointing display against then-No. 8 Michigan at Xfinity Pavilion on Jan. 26, it appeared the team was heading in the wrong direction.

The Terps had yet to eclipse 195 points through three meets, and their 193.525 against the Wolverines was more than a full point less than what they achieved at Illinois a week earlier. But Maryland vowed to stick together during the rough start to the season.

Ever since the Michigan meet, Maryland has looked revitalized, posting season-high team scores in consecutive meets. The young Terps have shown the ability to overcome adversity through the first five meets of the season, culminating in an impressive victory over No. 20 Ohio State, 195.950-194.250 on Friday.

The Terps spent the week after their meet against the Wolverines correcting their errors and adding new elements to their routines. That resulted in an improved performance against Rutgers on Feb. 2, a showing in which the Terps scored a season high on vault and a then-season high on floor.

The following week of preparation involved much of the same, as the Terps continued to perfect their routines before they faced a formidable Ohio State squad.

While Maryland eventually earned a season-best team score in a win against the Buckeyes, Friday’s meet wasn’t without moments of adversity. Despite setting a new season high on bars, the Terps were down after the first half of competition. Maryland also suffered two falls in the second half of the meet, further complicating things as it attempted to stage a comeback.

However, the Terps stepped up when it mattered most, earning a 48.825 on beam and a 49.075 on floor, another season high, to vanquish the Buckeyes.

“At the halfway point we’re down, and then we start off beam with a fall,” Nelligan said. “For them to … hit five beam routines in a row, hit five routines on the floor and take the win — I couldn’t be more proud of them.”

Senior Shynelle Agaran, a key performer from last year’s squad, dressed for competition Friday after missing the first six meets. While Agaran didn’t compete against Ohio State, her return would provide an extra boost for the Terps.

“It’s good to see her coming back,” Nelligan said. “We need her to get a little more healthy still, but I’d like her to keep progressing so she can really finish out her senior year strong.”

Meanwhile, senior Alex Robinson has been a revelation for the Terps after returning from an ACL injury. Robinson, who had not formally competed since her freshman year, posted a career-best 9.8 on floor for the second straight meet.

Maryland’s victory was even more impressive given the Terps’ poor record against the Buckeyes — Ohio State had won 10 of its 11 meets against Maryland prior to Friday’s meet. That wasn’t lost on the Terps.

“I think the last time we went against them was in 2009,” sophomore Emilie LeBlanc said. “The fact that we came in here and we crushed it was amazing.”

As Maryland progresses through the season, the team will inevitably face some additional hardships. But with the Terps showing their heart and resilience in their past few meets, the team is enthused about the future as they enter a busy part of the schedule.

“We’re just going to keep building off of this,” sophomore Collea Burgess said. “The sky’s the limit.”