After loss at Purdue, Maryland has lost 19 straight road games to ranked foes 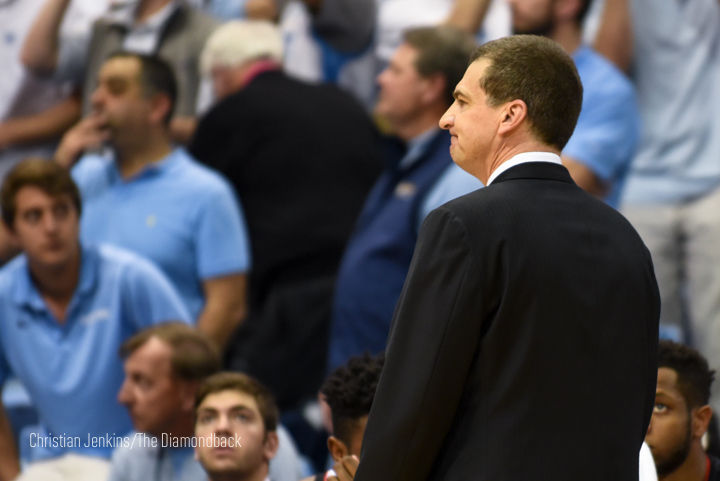 WEST LAFAYETTE, INDIANA — When the Terrapins men’s basketball team earned a spot in the NCAA Tournament last spring, it marked the end of a four-season drought. The Terps had reached the promised land for the first time under coach Mark Turgeon.

This year, the Terps will once again take part in March Madness. But a longer dry spell persists. It’s been nine seasons since the Terps last beat a ranked team on the road. Saturday was the latest chapter in the streak, as the No. 14 Terps fell, 83-79, to No. 15 Purdue. And with the season winding down, the Terps are running out of time to break the 19-game drought.

They have one more chance when they travel to No. 12 Indiana on Sunday. While the No. 14 Terps’ troubles against top-25 teams have caught the attention of national media outlets such as ESPN, their struggles on the road aren’t limited to quality opponents. The Terps are 4-5 on the road, including a loss to Minnesota, which entered that game 0-13 in conference play.

Saturday at Purdue, a slow start put the Terps in a hole early as they trailed 24-8 less than eight minutes into the game. After the defeat Saturday, Turgeon and his players pointed out that the team had overcome that deficit and tied the game late. But he and his players acknowledged that the slow start hurt the Terps’ chances. So with postseason tournaments looming, the Terps are focused on beginning the game stronger away from Xfinity Center.

“It’s not really about the end of the game for us,” forward Jake Layman said. “It was more the beginning and starting off that way.”

The Terps haven’t won on the road against a ranked team since Jan. 19, 2008. A lot has changed since then. (Graphic by Evan Berkowitz/The Diamondback)

The Terps never led Saturday. Purdue scored the first four points and led by seven less than three minutes into the game. In one of the loudest environments the Terps have faced all season, they began the game 3-for-12 from the field. When they finally broke out of that slump, they trailed by 16.

When the Terps were on offense in the first half Saturday, they couldn’t hear Turgeon shouting from the other side of the court, freshman center Diamond Stone said. That made coming back from a 16-point deficit even more difficult.

Still, the Terps didn’t fold Saturday. They tied the game at 76 with about two minutes remaining.

“It could have been easy [to give up],” sophomore guard Jared Nickens said. “It’s a loud environment, their fans were really into it, and that was a good team we were playing. But we just had to stay mentally tough and just keep grinding.”

A three-quarter-court press helped the Terps erase a 10-point deficit with less than four minutes remaining in a span of 90 seconds. At the front of that press was Layman. The 6-foot-9 senior used his length to get into the Boilermakers’ passing lanes and create turnovers. The Terps had five of their 10 steals in that 90-second stretch.

The Terps likely won’t deal with as hostile environments in the Big Ten and NCAA Tournament when games are played at neutral sites. So Turgeon wasn’t fazed by the loss. After all, Purdue entered Saturday 15-1 at home, including one win over a currently ranked team.

While Turgeon and the Terps took positives out of Saturday’s loss, they couldn’t change one thing. The streak continues.