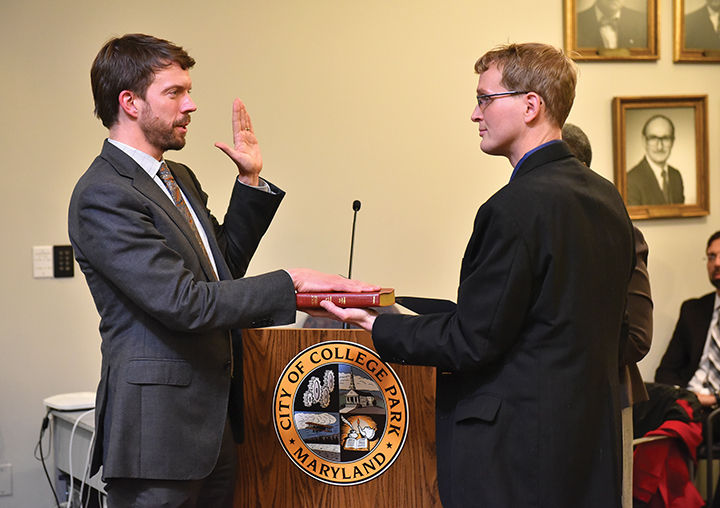 College Park Mayor Patrick Wojahn announced on Wednesday in a video message that he intends to run for reelection this November.

“Thank you for all the help and support you’ve given me in the past two years,” Wojahn said in the video. “… I cannot believe that my first term is already almost over — there’s so much more that we can do — so I’ve decided to announce my campaign for reelection as mayor of College Park.”

Wojahn, who was sworn in as mayor in December 2015, said in an interview Wednesday he plans to zero in on issues such as transportation, sustainability and development in downtown College Park during his campaign.

The mayor defeated District 4 Councilwoman and Mayor Pro Tem Denise Mitchell in the 2015 election with 1,267 of 2,222 votes — the city’s most competitive contest in two decades. He is currently running unopposed.

Wojahn has been an advocate in the past for the Purple Line, a proposed addition to the Washington Metro system that would have five stops in this city and is slated for completion in 2022. In 2014-15, Wojahn served on the board of directors for Purple Line NOW!, a group in support of the project. Wojahn wrote a guest column for The Washington Post in the fall critiquing the “cars-only” mentality.

“This cars-first approach is wrong for the D.C. region and wrong for our nation,” Wojahn wrote. “A bigger look at transportation is necessary to better move people to the places they want to go.” Wojahn also mentioned on Wednesday that parking “continue[s] to be a challenge” for College Park.

Sustainability initiatives that have addressed transportation shortfalls include the city and the University of Maryland’s partnership in May 2016 to launch a bike-share program with 120 bikes located in 14 stations around College Park. As the director of government relations at Rails-to-Trails Conservancy, Wojahn said he aims to make the city greener by making it easier for residents to walk and bike to work.

The city has also partnered with Corvias Solutions, a private planning company, to install an estimated 46,000 water filtration devices in storm drains in the area by 2025. The filtration devices will help prevent pollution from reaching the Chesapeake Bay.

“We’ll continue to work on stormwater management and making sure everything we do is sustainable,” Wojahn said.

And as the city and this university continue to work toward achieving the University District Vision 2020 plan — which aims to make College Park a top-20 college town in the next few years — Wojahn said he’ll also be looking to further develop the downtown area. The plan seeks to bring in new businesses and diversify the types of establishments along Route 1.

Various businesses have come to the city recently, including Milkboy ArtHouse and The Hotel at the University of Maryland, which are expected to open by spring break and July, respectively. There is also progress being made on the new City Hall, which will remain in the same location and be modernized over the next couple of years, Wojahn said.

Wojahn cited one of his largest successes since taking office in December 2015 as expanding communication with the city’s residents. After his election, Wojahn began sending out a weekly mayoral update via email and on his Facebook and Twitter accounts.

“I want to continue to hear from residents,” Wojahn said. “I will be talking to them to see how they think I’ve done and what they want to see if I get reelected.”

Before running for mayor, Wojahn served four terms on the City Council as a District 1 councilman, founded College Park Day in 2010 and established the Neighborhood Stabilization and Quality of Life Workgroup, which addresses tensions between students and city residents. His 2015 campaign platform centered on ideas such as development, sustainability and improving safety in the city.

Wojahn said Wednesday was the beginning of campaign fundraising, and almost $1,000 was raised the same day. Being reelected will allow him to build on the progress that has already been made, he said.

“I look forward to continue working for the residents of College Park,” Wojahn said.