“One of our studs”: Maryland baseball’s AJ Lee morphs from unheralded sub to starter 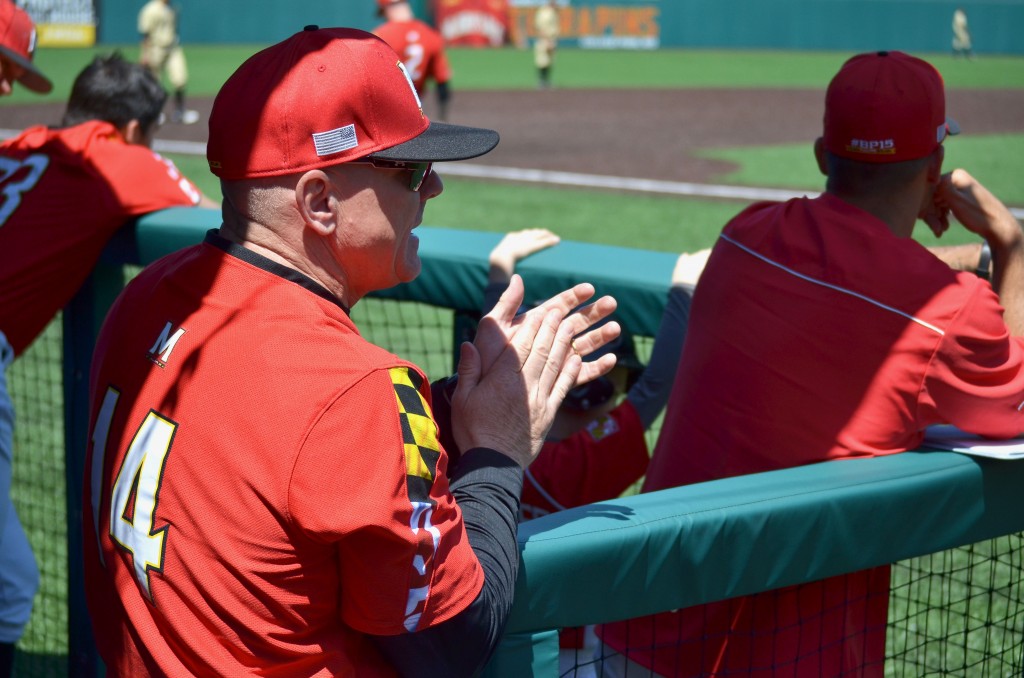 When Maryland baseball infielder AJ Lee arrived in College Park for one of the Terps’ prospect camps during his sophomore year at St. John’s College High School, the coaching staff didn’t recognize him.

Lee was on the Cadets’ junior varsity team at the time, something coach John Szefc suggested “doesn’t usually happen” for prospective college baseball players. Little changed during his junior season, but a dominant senior campaign at the varsity level — Lee hit .388 with 22 RBIs and scored 34 runs — landed him a spot on the Terps’ roster.

Lee didn’t see much time as a freshman in 2016 — he hit .172 in 19 games — but after improving in the Alaskan Baseball League last summer and starting third baseman Andrew Bechtold transferred, he’s excepted to start in Maryland’s opener.

“He went out last summer and came back and it was pretty clear he was a better defender in every phase,” Szefc said. “He arguably has the best glove position and feet we’ve had since I’ve been here. [His offense] has been catching up to his defense. He just gives us a really solid defender over there.”

Bechtold, who started 49 of Maryland’s 57 contests at third in 2016, left the program in the offseason. Plus, infielder Brandon Gum, a George Mason transfer who suffered a torn rotator cuff last season, won’t be healthy by the time the Terps open the season Friday against Ball State.

So, Lee should get a chance to test the skills he developed with the Mat-Su Miners in the Alaskan Baseball League.

He hit just .255 last summer, but he developed an approach for making more contact that emphasized dragging bunts down the foul line for infield hits. Szefc also challenged Lee to become an offensive threat capable of recording extra-base hits. Lee changed his mentality and ended the summer season with 25 hits, five of which went for extra bases, and five multi-hit games.

When fall practice started in College Park, Szefc noticed Lee’s defensive skills, especially making throws on the front-end of double plays, had improved dramatically, too. He had worked to gain more experience as a corner infielder with junior preseason All-American Kevin Smith entrenched at shortstop.

“The summer was a big stepping stone for me,” Lee said. “Getting out of your comfort zone a little bit always helps when you go from being the local kid playing at your local school and always playing around people you know … An aggressive mentality is the main thing I came back with.”

Throughout the fall, Szefc recognized that Lee had an improved offensive strategy. His two-strike approach changed and he was able to hit the ball to right field more often. Lee felt the same as he held his own in live practice against the team’s pitchers.

As the Terps prepare to face the Cardinals, Louisville and Alabama State in Clearwater, Florida, this weekend, Lee is no longer an unfamiliar face; he’s the team’s starting third baseman and has the pitching staff’s trust.

“Last year he came in and was kind of small and not really mature, and over the past year, it’s like he’s a new player,” right-hander Brian Shaffer said. “I’m more than happy to have him behind me. He wasn’t in the lineup last year. Now, he’s one of our studs.”