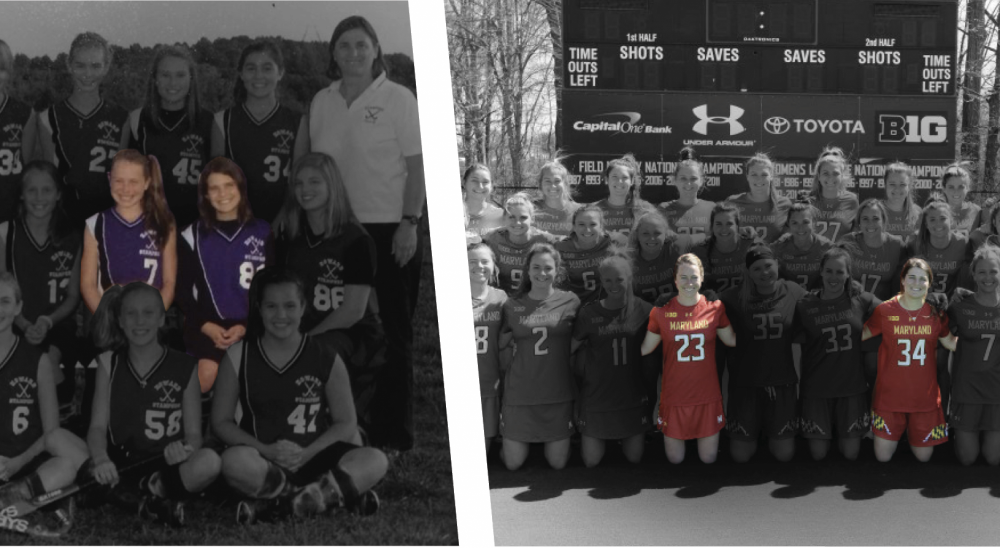 Megan Taylor couldn’t believe her eyes. All she could do was look at defender Nadine Hadnagy for confirmation.

The Maryland women’s lacrosse goalkeeper had just watched attacker Megan Whittle rifle a shot from around the eight-meter arc into the top corner against Princeton on April 12. The goal was called back due to a shooting space violation, but Taylor didn’t care.

“I went up to her and was like, ‘Thank you for never doing that to me in practice,'” Taylor said. “I would literally close my eyes.”

But Whittle wouldn’t be scared to unleash that blast in training.

“Meg definitely would have stopped it,” Whittle said.

The Megans, despite their disagreement over that shot, are close friends and lynchpins for the No. 1 Terps, anchoring them on opposite ends of the field for the past two seasons.

Whittle led the team in scoring each of her first two campaigns and is on track to do so again this year. The junior stands three tallies away from 200 career goals, is the reigning Big Ten Attack Player of the Year and received her third nomination for the Tewaaraton Award.

In Taylor’s second season in goal, she’s grown from the Big Ten Goaltender of the Year as a freshman to one of the nation’s best.

Her 55.5 save percentage places her second in the country, and she had career performances against then-No. 4 Syracuse and No. 3 Florida, making 18 and 20 saves, respectively. She was also one of 25 players nominated for the award given to the nation’s top player.

Both have put together distinguished resumes since joining forces in College Park last season, but the Megan connection goes back further than their college careers.

When the pair was about 6 or 7, they played for a Howard County recreational league team called the “Green Gators,” which brought inflatable gators to the games. They were just beginning their lacrosse careers, but the players saw the talent in each other.

Not before some missteps, though.

Every player was required to play a half as goalie. Because of her affection for scoring, Whittle thew a fit, but eventually gave in.

Whittle stood in goal with her hand on her hip and allowed about seven goals in a half. The Green Gators were undefeated that season, but their lone tie came when Whittle played in goal.

“I totally ruined that for the entire team,” Whittle laughed. “We should have had Meg in there.”

Meanwhile, Taylor barely recalled the start of her lacrosse career because she was so young. However, she remembers her brother, Alex, insisting she would become a goalie because he played the same position.

When she got her chances in goal, if only for a half, Taylor was the “smallest, most unintimidating kid on the field,” Whittle said. But she made herself known.

Whittle said nobody at that age knew how to shoot or do much with their sticks, but Taylor, at least a year younger than the other players, was “making saves she probably shouldn’t be making.”

Taylor played for Hero’s Lacrosse Club early in her career before switching to M&D Lacrosse Club, where several current and former Terps developed.

Taylor’s eventual coach at M&D, Amanda Brady, said while watching Taylor play for Hero’s she would think, “Oh my gosh, that kid is amazing.” Taylor made saves Brady wouldn’t expect a college goalie to perform.

“My dad and brother would say to me, ‘All right, you’re pretty decent at goalie; you should just stay with it,'” Taylor said. “I was just like, ‘OK.'”

Attack Megan Whittle moves the ball away from a defender during Maryland women’s lacrosse’s 18-12 victory against Princeton on April 11. (Marquise McKine/The Diamondback)

While Taylor was performing beyond her years as a goalie, Whittle’s success as a scorer was evident.

The rec league mandated a team must complete three passes before it was allowed to score. Though the rule was meant to teach the players about ball movement, it frustrated Whittle because many of her teammates had difficulty catching. So, she improvised.

“I would throw it, someone would drop it, I would run and scoop it up,” Whittle said. She repeated that three times, then she would score.

Along with lacrosse, Whittle and Taylor played youth field hockey together, and Taylor said the game plan was similar in both. Hit or throw the ball to Whittle, let her run after it and watch her do the rest.

After playing a season together under Chris Robinson with M&D early in their teenage years, Taylor dropped down to play for Brady with her own age group. Although they were apart, Whittle and Taylor continued to grow as lacrosse players.

Robinson said Whittle’s combination of speed and skill made her a force. She had “God-given speed and ability,” but she never stopped perfecting her craft.

In Whittle’s junior and senior years of high school, Robinson, the McDonogh School coach, saw significant improvements in her speed. Robinson was watching the Terps play at Penn State on April 20 when he noticed Whittle drive to goal looking for a shot from her natural right side. When the Nittany Lions blocked her off, she switched to her left and scored, a skill Robinson developed with her.

While Whittle continued to improve, Brady said Taylor was always “a force in the cage.” Brady said Taylor’s confidence grew as she aged and developed a mentality that no shots would pass her. Robinson called it a bold personality statement, saying the goalie is either the hero or the villain, and Taylor usually ends up the former.

Brady said Taylor’s knowledge of angles and space often made up for the fact that Taylor, currently listed at 5-foot-3, was not the biggest goalie.

Goalkeeper Megan Taylor makes the save during Maryland women’s lacrosse’s 17-6 win over Virginia at the Field Hockey and Lacrosse Complex on April 20, 2016. (Matt Regan/The Diamondback)

Though Whittle had a year’s head start, the two rejoined forces in College Park last season. They won the conference’s player of the year award for their respective positions as the Terps reached the national championship game.

This season, they’ve helped each other improve.

When Taylor allows a goal in practice, she tells the scorer how impressed she is. When she compliments Whittle, the junior gets extra excited because “that’s when you know you actually make a great shot.” Coaches criticize Whittle for not scoring in training, but she shrugs it off because Whittle said Taylor is “the best goalie in the world.”

Midfielder Zoe Stukenberg said the Terps run a drill in practice for attackers called “not for the goalie.” Goalies aren’t supposed to stress if the shots go in.

Even in that drill, Taylor makes stops.

The Terps boast the nation’s top scoring offense, and Whittle said it’s because of Taylor. Naturally, Taylor claims her success stems from the talented attackers she faces in practice and the strong defense in front of her.

Taylor’s relationship with her defenders has always been important to her. She developed handshakes or rituals with each of her M&D defenders, including Terps defender Meghan Doherty. To this day, the two do their special handshake before every game.

That camaraderie has driven Taylor to make a massive leap from her freshman season.

“She’s faced all the top shooters in the nation,” Reese said. “She’s come into this season playing at a whole other level.”

Meanwhile, Whittle is on the brink of becoming the sixth Terp to break the 200-goal mark. She’d be the only junior in program history to do so. Stukenberg called Whittle a “force of nature” and said her mindset was always centered on becoming the best attacker in the country.

This season, Stukenberg believes Whittle’s repertoire has grown. Though she’s always been a dynamic attacker, the captain has seen Whittle’s game evolve beyond scoring goals, especially since she’s been faceguarded often since her freshman year.

“She’s done a really good job of working out of faceguards to get other people open,” Stukenberg said, “the kind of dirty work she doesn’t get as much credit for.”

Whittle and Taylor’s progression began when they were a step above the competition with the Green Gators. It’s continued through their second and third seasons in College Park as they helped lead the Terps to a third-straight unbeaten regular season.

They find it funny that, with lacrosse’s offside rule, Whittle doesn’t enter Taylor’s end of the field, and as the goalie, Taylor doesn’t advance beyond the defensive area. Whichever side the ball is on, one enjoys watching the other.