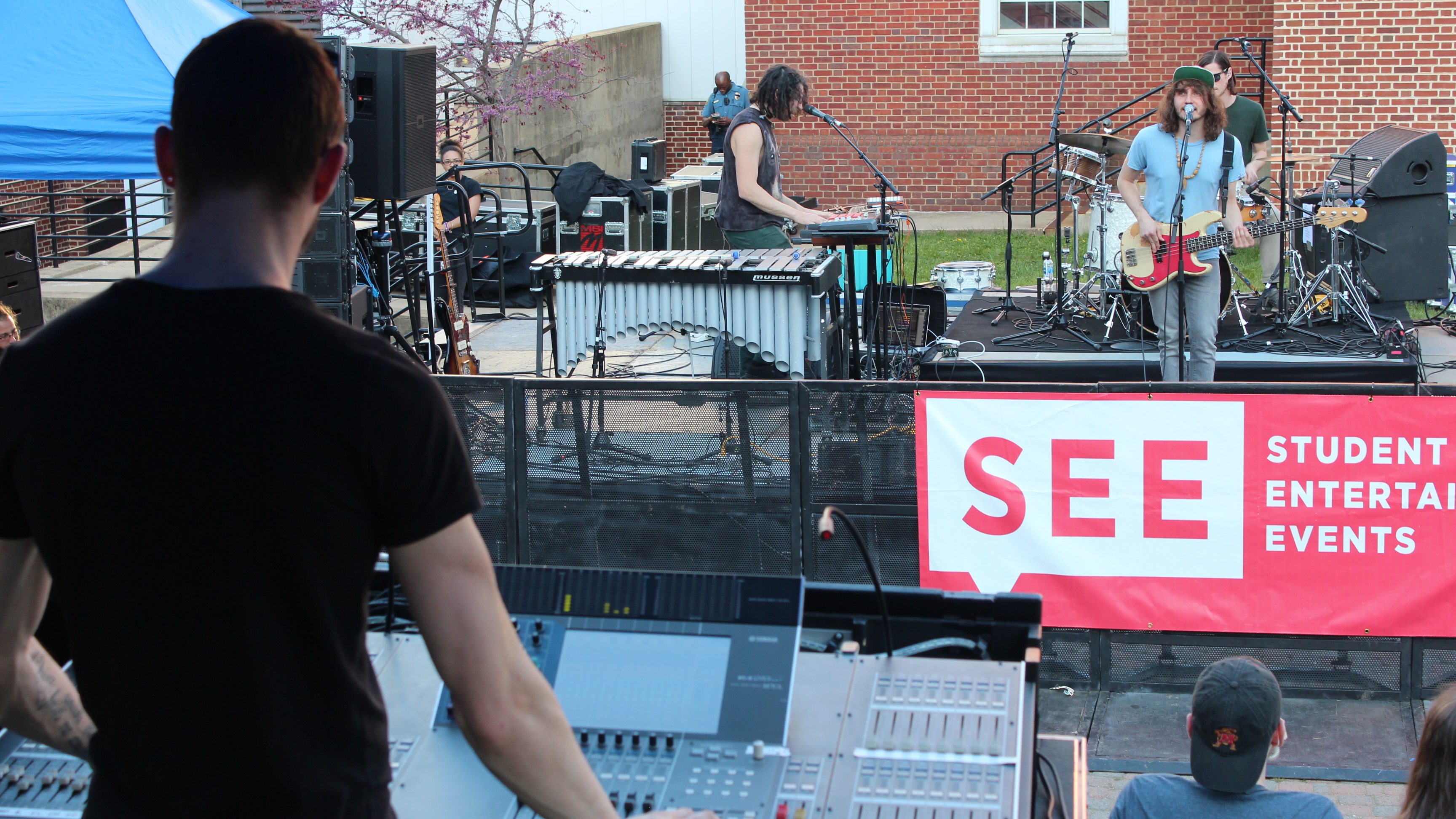 It seeped into bare shoulders and unshod feet. It bounced off aviators and streamed through vernal leaves. Its praises echoed out of the mouths of everyone who passed by.

No one could hide from it, but no one wanted to. The sun transformed Student Entertainment Events’ annual outdoor concert series, Terpstock, into a true celebration.

“You couldn’t order up a more perfect day,” said Kenny Vasoli, the bassist and lead singer of headlining act Vacationer, from “Chillidelphia.”

But before the indie-rock synth group took the stage, student acts Box Era, Hayley Fahey and The Radiographers got the chance to play in front of the waxing audience camped on the grassy terrace.

Fahey, a senior, was the second act of the afternoon, following Box Era. The journalism major started singing as a young child in musicals. Later, she began to write and perform her own creations.

“I really love performing because I get to share my music with the audience and I get to be on stage and dance around,” she said. “I just love music so much; it’s my life.”

Sunday was her first time playing Terpstock, and she graced the crowd of about 60 with a Meghan Trainor cover plus original songs, including her favorite, “Tell Me Why.”

“I thought the crowd was really good today,” she said. “People started filling in as they heard the music and people were just laying the in grass and listening and chilling out.”

She had senior finance and marketing major Jessie Xu to thank for the opportunity. As SEE’s musical arts director, Xu organizes events such as the fall concert and Battle of the Bands. But Terpstock’s easygoing aura holds a special place in her heart.

“It’s probably my favorite event of the year, and I’m just so glad to be a part of it,” she said.

Xu gets to pick the lineup, which often features up-and-coming artists. As the runner-up of SEE’s Battle of the Bands contest, The Radiographers automatically earned the final student performance at Terpstock, but Xu thought Fahey and Box Era had also had winning sounds.

As for the professionals, one of Xu’s friends suggested Baltimore psychedelic indie-rock band Sun Club. Vactioner was Xu’s choice.

“I’m a personal fan of their music and I thought they would be great for an outdoorsy, relaxed vibe,” she said.

By 6 p.m., the audience had swelled to about 200 as Vacationer took the stage. Bassist and lead singer Vasoli wasted no time in making the audience feel at home.

Painted in cool blue shadows, students nodded and swayed with the self-proclaimed “Eastern seaboard’s foremost relaxation specialists.” It was summer captured in an hour, psychedelic indie mixed with the day’s buzzword: “vibes.”

“They were awesome and everything I hoped and dreamed,” junior computer science major Ryan Dunn said. “They incorporate some really cool tropical elements and they’ve got those summertime vibes.”

Chatting with her friends, senior Jess Ubogiy sensed it too.

“It’s just feel-good rock,” the physiology and neurobiology major said. “When you listen to them, you get good vibes.”

Which is exactly what Vasoli set out to do when he formed Vacationer in 2010.

“I wanted to make something that was sort of a hybrid of electronic music and full band music,” he said. “I wanted to do something that wasn’t terribly loud because I’d been playing rock and roll music for the better part of my life and my throat and my ears were just sort of hurting me.”

He wanted something chill, perhaps something that college students could groove to as a Sunday afternoon respite from a rapidly closing semester. As the band began to collect exotica and Polynesian influences, Vasoli looked for a name that fit.

He first wanted to name the band Leisure, but when he found out the name was taken, a thesaurus brought him to vacation, and he added the “er.”

As the band played their most popular songs, “Paradise Waiting,” “Trip” and “Everyone Knows,” Vasoli kept it fun, inviting the audience to take a ride on the “chill-coaster.”

“I need a trip; a trip’s what I need,” he crooned over a backing track of birds and nature sounds.

“They bring something interesting to the table compared to other alternative bands,” Ubogiy said. “It’s the underlying harmonies they create. The synth is my favorite part.”

As the evening faded into a cooler night, Vacationer sent the crowd home with warm wishes.

“You’re all a bunch of pals,” he said. “I have a feeling this is going to be the best summer ever.”