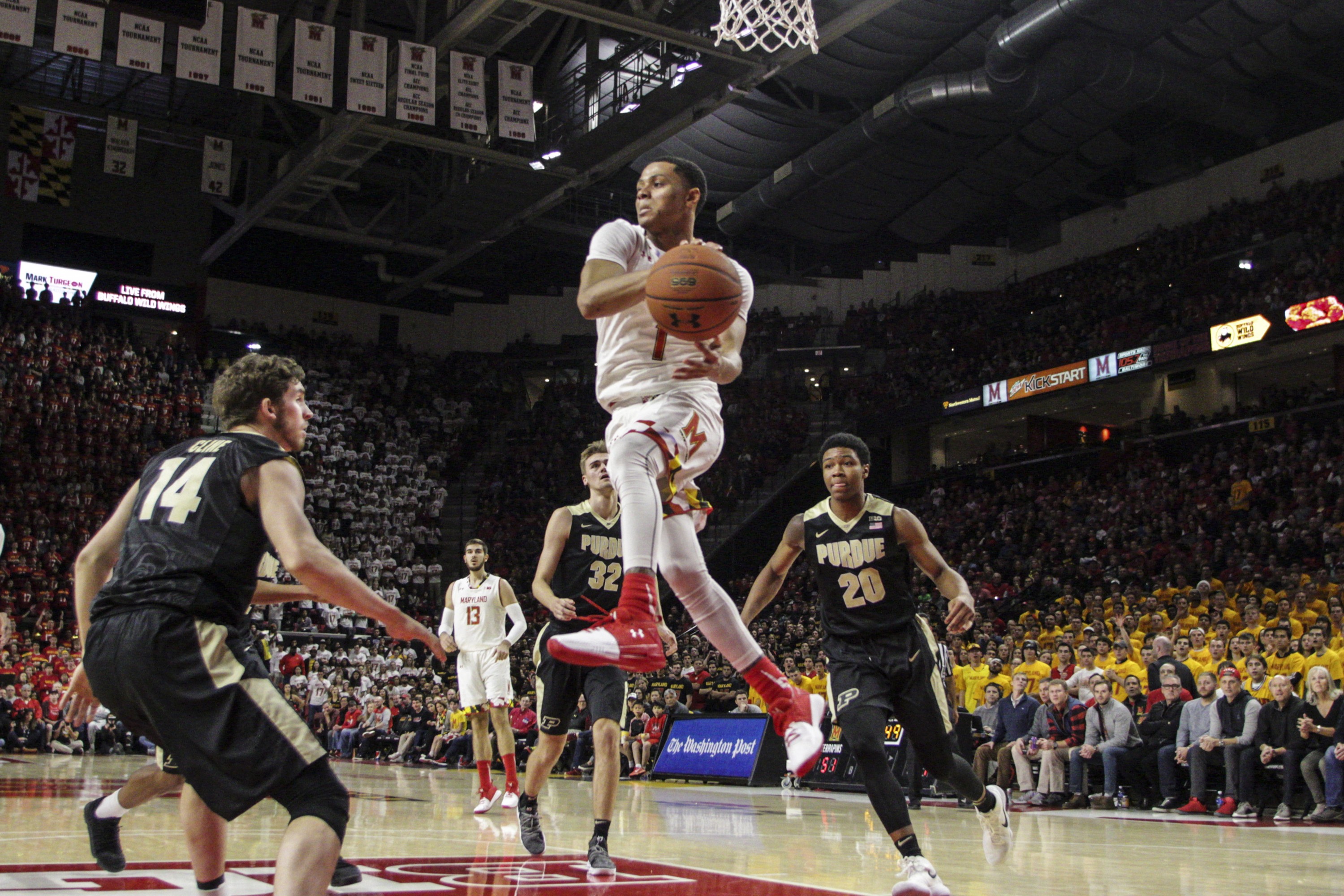 About a year ago, guard Anthony Cowan put together his breakout game as a facilitator in Maryland men’s basketball’s Big Ten opener against Illinois, recording 12 points with six assists.

A year later, Cowan is no longer known just for his passing and quickness. Cowan improved his shot this offseason and is more crafty in the lane, weaving through defenders for layups or to create another shot around him. The most obvious difference, though, is his confidence.

So after Cowan sunk a free throw with 0.6 seconds left in overtime to give Maryland a one-point lead over Illinois on Sunday night, Cowan smirked at the Terps bench and shrugged his shoulders.

Cowan scored nine of his career-high 27 points in overtime to lead Maryland to a 92-91 victory over the Fighting Illini at State Farm Center, helping the Terps avoid an 0-2 skid to begin Big Ten play.

The Terps (7-3, 1-1 Big Ten) controlled the game in the first half, opening on a 10-0 run and leading by as many as 22 points, shortly after intermission. Cowan scored 16 points while coach Mark Turgeon’s squad shot 73.1 percent before halftime.

But Cowan scored just two points in the second half and the Terps turned the ball over a season-high 25 times, allowing the Fighting Illini (6-3, 0-2) to storm back. Forward Leron Black finished with 18 points on 8-for-11 shooting while three other Illinois players scored in double figures.

The Terps were under a second away from mulling a 0-2 Big Ten record until conference play resumes in January, but forward Bruno Fernando tipped in guard Kevin Huerter’s missed 3-pointer at the end of regulation to send the game into overtime.

Each of the Terps’ three losses have been decided by five or fewer points as the team has searched for a late-game option following Melo Trimble’s departure to the NBA this past offseason. The Terps’ star sophomore trio answered those concerns in the final minute of overtime, as Cowan, Huerter (17 points) and forward Justin Jackson (season-high 20 points) scored each of Maryland’s final three baskets.

Illinois guard Mark Alstork tied the game with 17 seconds remaining. On the ensuing possession, Alstork fouled Cowan on his drive to the hoop. The sophomore connected on his first shot before intentionally missing the second, displaying the poise his mentor embodied during his three seasons in College Park.

There are plenty of things Maryland needs to solve before resuming Big Ten play — limiting turnovers, playing better defense down the stretch and developing a suitable backup point guard for Cowan.

But Turgeon’s squad has another month to solve those concerns until Big Ten play continues. For now, it can breathe as it returns home for a five-game home stand to cap its nonconference slate.