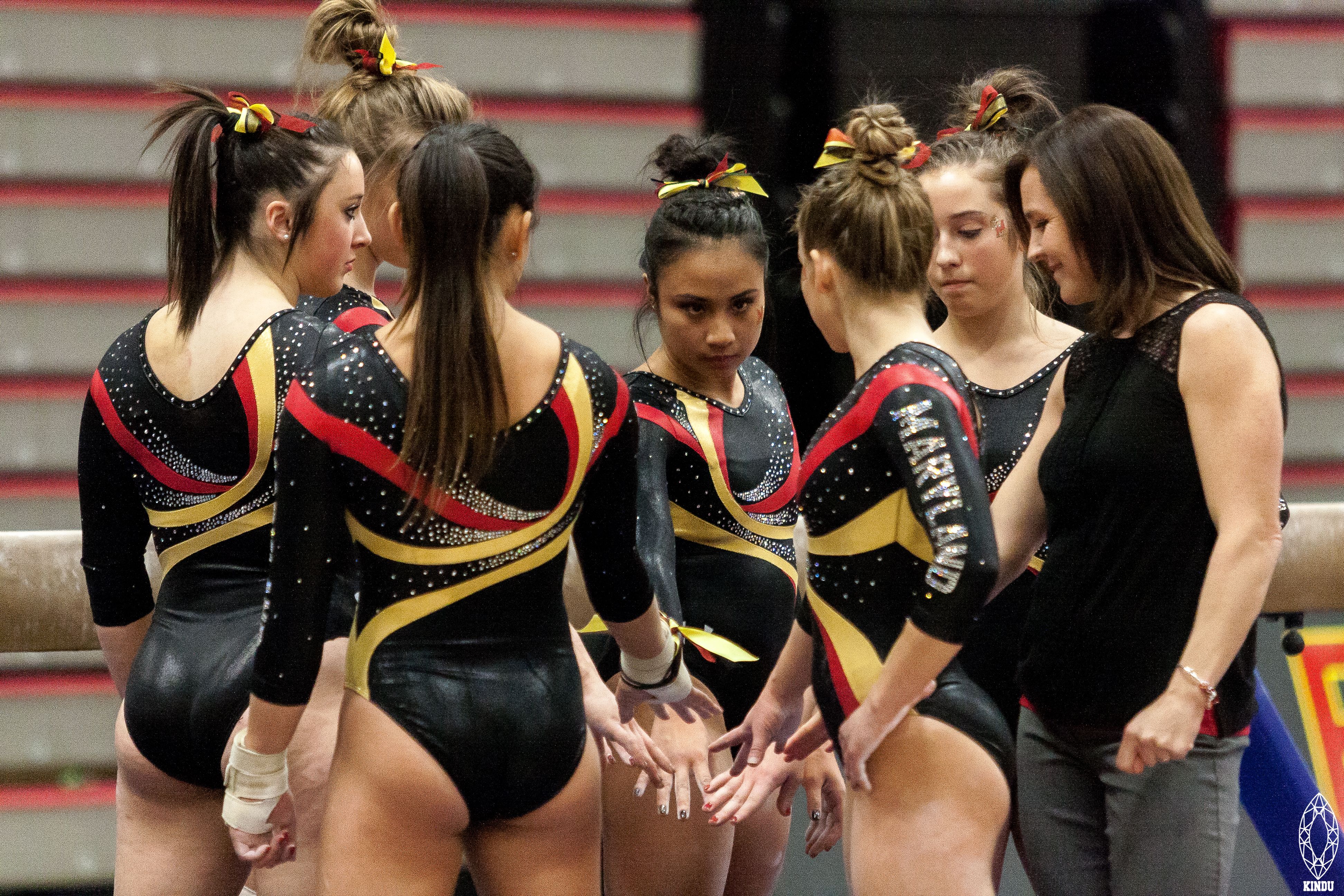 The gymnastics team huddle up and prepare to begin Maryland’s Red vs. Black matchup at Xfinity Center on Dec. 9, 2016. (Marquise McKine/The Diamondback)

Even as Maryland gymnastics suffered a defeat at the hands of Illinois on Jan. 19, the team didn’t fall in any of its routines — a feat made more impressive by the fact it was just the Terps’ second meet of the season.

And the performance came at the right time. The meet was the first time Maryland brought out the “Stick Shell,” a new tradition that rewards flawless landings.

The “Stick Shell” — a shell-shaped backpack whose name was coined by sophomore Collea Burgess, the creative force behind it — has sparked a more fun team environment and become a rallying point for the Terps amid their gradual improvement.

When a gymnast finishes a routine with a dismount free of hops and wobbles, she is given the shell, wearing it until another teammate sticks a landing. With hops and wobbles being common in gymnastics, the shell makes smooth dismounts even more rewarding.

“Seeing your teammates run up to you and put that shell around your neck,” junior Tiara Wright said. “It’s just everything.”

Bedazzled with fabrics and jewels, the shell has come to represent Maryland’s commitment to having fun — something that can be difficult in a sport where physical and mental stress is so prevalent.

“Having fun is probably one of the things that keeps you sane,” freshman Sanya Glauber said. “Especially doing a sport like this where your body is hurting all the time.”

As the season has worn on, the Terps have focused more on enjoying their routines to try and mitigate the pressures of college gymnastics. This change in perspective has been a key factor in Maryland’s overall team improvement, as the Terps have climbed to No. 32 in the rankings after breaking 195 in three consecutive meets.

“After every single meet, [we talk about] what did we do well,” coach Brett Nelligan said. “And they always say, ‘[We] had fun.’ So the meets that we have fun [in], we usually do our best.”

[Read more: “The sky’s the limit”: With a rough stretch behind it, Maryland gymnastics is thriving]

This joy is evident in the Terps’ routines, which have become increasingly ambitious and personality-driven as the season has gone on. Burgess and fellow sophomore Sabriyya Rouse’s floor routines in Friday’s meet against Minnesota were two clear examples of this fun-loving approach.

Both sophomores, bolstered by strong floor performances the previous week against Ohio State, danced with confidence and swagger as they earned scores of 9.85 and 9.8, respectively.

“I like to make floor an overall fun time for everyone,” Burgess said after the Minnesota meet. “[I] bring people in, show them my personality. Just like how I would act in the gym — funny, goofy, and bubbly.”

With the Big Five meet on Friday, the Terps hope to have more routines worthy of the “Stick Shell.” While Maryland will be facing off against four talented Big Ten schools, the team isn’t backing down from the challenge.

“It’s awesome,” Nelligan said. “There’s going to be a great crowd there … so we’re really looking forward to it.”