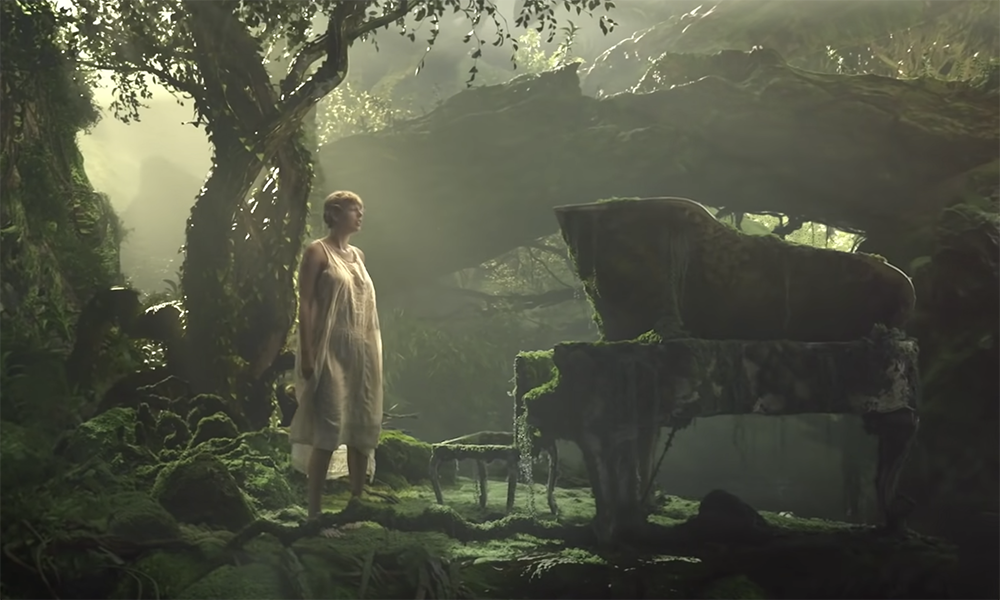 On July 24, Taylor Swift dropped her eighth album, ‘folklore,’ and a music video for her new song “cardigan.” (Photo via YouTube)

I’ll be frank: I’ve never been one to relish in a slow song. Although I can always appreciate the standard ballad on just about any given album, they usually don’t pique my interest. Whether I am thriving or not, I want upbeat tunes to further the aforementioned thriving — or to extinguish the lack thereof.

And yet here I am, blasting folklore for maybe the tenth time, tallying which songs make me cry more through each additional listen-through.

Taylor Swift dropped her eighth album folklore last week without much notice for Swifties (of which I have recently made my status public) to properly panic over.

This lack of fanfare for an album rollout is out of typical Taylor fashion. In recent memory, she’s seemingly put as much effort into the lead-up to an album’s release as the album itself. Whether it was a music video filled with Easter eggs about an upcoming album or a complete social media purge, fans usually got the not-so-subtle hint that Taylor was about to feed her children with some fresh material.

Now, I’m not saying that I’d ever clock the festivities, but perhaps it was the suddenness of folklore’s release and the lack of expectation for it that left me especially taken aback. Eight albums in, Taylor Swift had the nerve to nonchalantly release what is, in my opinion, the strongest album of her entire career with the air of it being just another social media post.

At just over an hour in length, folklore’s 16 tracks lack any suggestion that this body of work was created by the same artist who made the bitter, EDM-tinged reputation or the saccharine, cavity-inducing Lover. Taylor has resurfaced from her deep dive into the murky waters of modern pop for a breath of air, in the form of an utterly gorgeous, stripped-back folk album.

Immediately, the emotions within folklore are palpable in the opening track, “the 1.” She sings the tale of arriving at terms with past love, and moving on to yeses and Sunday matinees. While she admits, “It would’ve been fun/ If you would’ve been the one,” she’s not hateful — and it’s unclear if there’s a hint at a sense of closure, but the peace of mind from accepting what will never be is seemingly still worth the journey.

The following track, “cardigan,” also the album’s lead single, is a flawless execution of everything great about Ms. Swift: a polished showcasing of her vocal range, startlingly personal songwriting (“Leaving like a father, running like water”) and an epic music video to match.

The record, as a whole, is far slower than even her earlier country records and largely instrumental, a departure from her recent pop efforts that was guided by the influence of indie king Aaron Dessner. Despite that, Taylor does serve up some gleefully enjoyable ditties for you to quickly dry your eyes before a prompt return to Sad Bitch Hours.

On “mirrorball,” Taylor personifies herself as a spinning, reflective disco ball in the way she hopes to bring light and joy into the listeners life by showing all the good that exists in yourself, unbeknownst to you. It feels like a joyous redo of any past school dance that left you unsatisfied and feeling like a loser. Another track on the upbeat side, “august” feels like an ode to summer romance — not envious of its finality, but grateful for the memories within its brevity. You can almost feel the sun striking down on your body or the salty air wafting into your nostrils.

However, the best track on folklore — and yes, I’ve done The Math — is Taylor’s long-awaited country homecoming “betty.” Overset by choruses of strings and accented with harmonica, we hear the tale of Betty and Taylor, the bouts of good and the boundless bad. It takes a lot to admit when you’ve deeply wronged someone, probably even more so to sing about it when you are arguably the world’s biggest pop star. But Taylor isn’t holding back here.

There’s something scandalously satisfying after seven albums of gradually escalating mature subject matter to hear Taylor say “fuck” at long last (She does it again on “mad woman”!)

I could go on about how unreasonably goddamn amazing this album is. From Taylor sounding like a sing-song APUSH textbook on “the last great american dynasty” (but somehow in the best way possible), to feeling like I’ve been slammed into a wall by Bon Iver’s Justin Vernon and his powerfully deep vocals on “exile” (also somehow in the best way possible), she simply does not miss on folklore.

How can she write a lyric like “If I’m dead to you, why are you at the wake?” on “my tears ricochet,” and expect me to be okay?

While no songs are “bad” per se, it’s hard to make every song memorable when you’re packing a 16-song playlist. I won’t call them bad, but the songs I found least memorable were “this is me trying” and “epiphany.” Sue me! (Just kidding, please don’t.)

At its sanded acoustic core, folklore is an album of reflection. The hate in her heart has been purged, and while she’s not fully healed, she’s well on her way. She can sing about the men who hurt her and how she sends presents to their babies now. That my friends, is what we call growth.

This record invites you to join Taylor in her journey of self-discovery, by staring into your past, dead in its ugly, beady eyes, and confronting it. And if you need a good cry, playing folklore in the background will make you feel at least a smidge better.