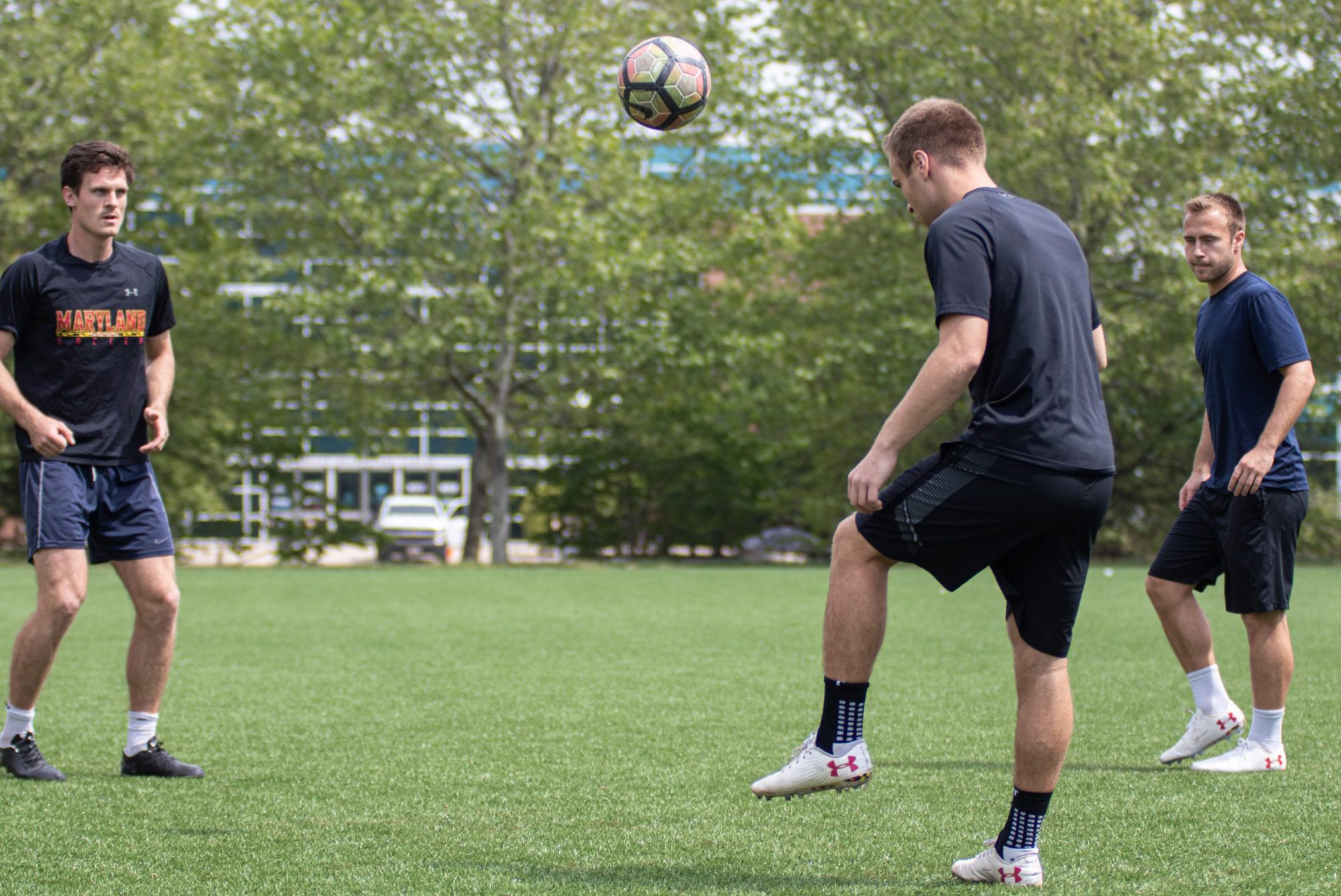 Go to La Plata Beach on any given Friday, and you’ll find a busy scene.

On the small turf field in the middle of the University of Maryland’s campus, there will usually be a large group of people — decked out in elaborate jerseys and footwear — chasing a slightly deflated soccer ball. People will be gathered on the beach volleyball courts, throwing themselves across the sand. Groups of students throwing a different kind of football, aiming to replicate high school glory days.

It’s a common picture, undoubtedly a familiar one for students at the university. But now, in the midst of the coronavirus pandemic, La Plata Beach is empty.

That is, until about 11 a.m. every day. That’s when four Maryland soccer players — Ben Di Rosa, his twin brother Matt, Eric Matzelevich and Mike Heitzmann — make their way over to the turf to train.

Their exercises aren’t complex. The quartet simply kicks a ball around, working on passing skills. And they’re not alone in their primitive attempts to work on their craft. Students across many Maryland athletics teams have adjusted over the last few months, finding ways to stay sharp even in the most uncertain of times.

“Our message to players has been to treat this like it’s your summer,” men’s soccer coach Sasho Cirovski said. “This is your individual time to be productive.” 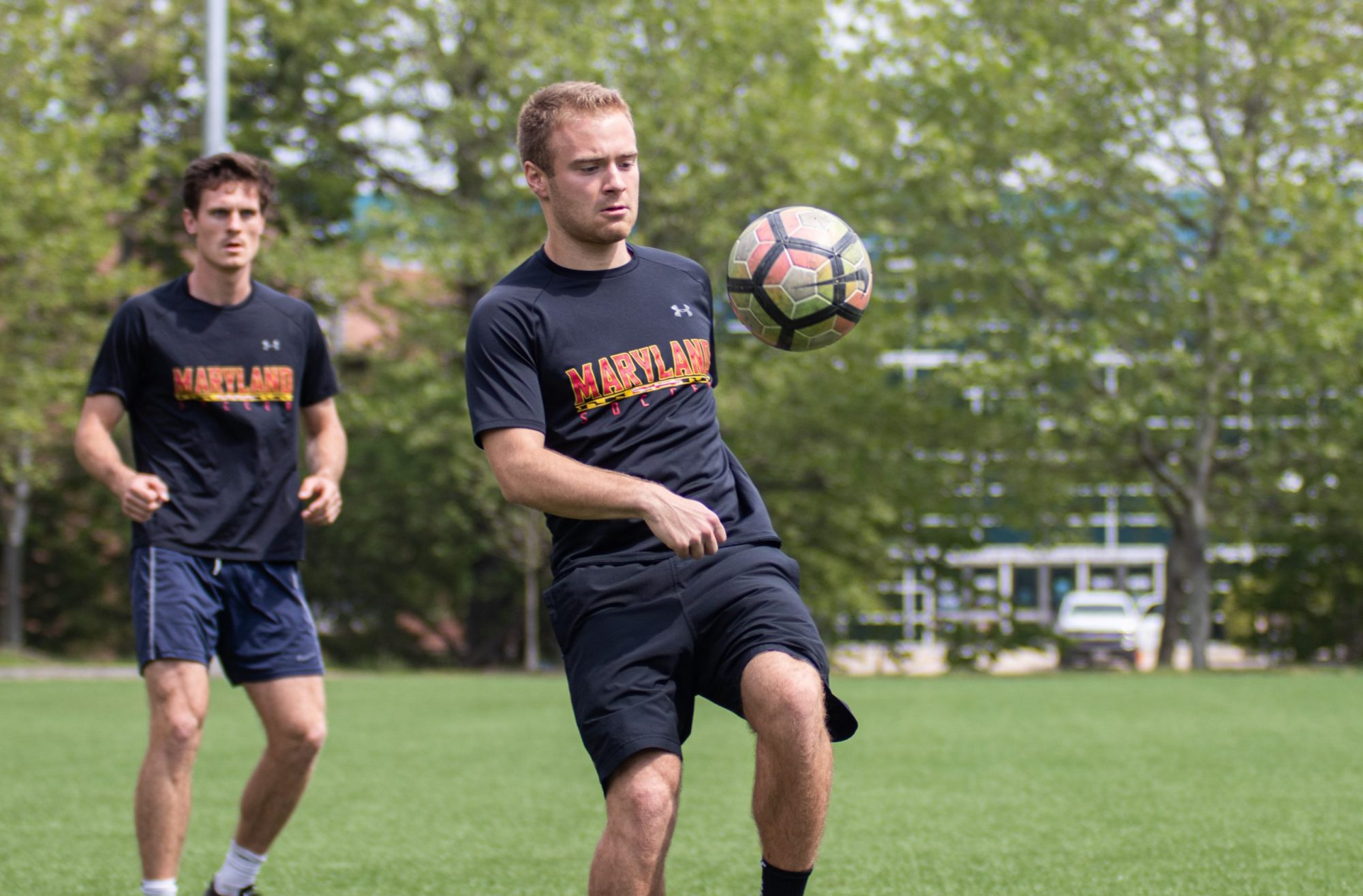 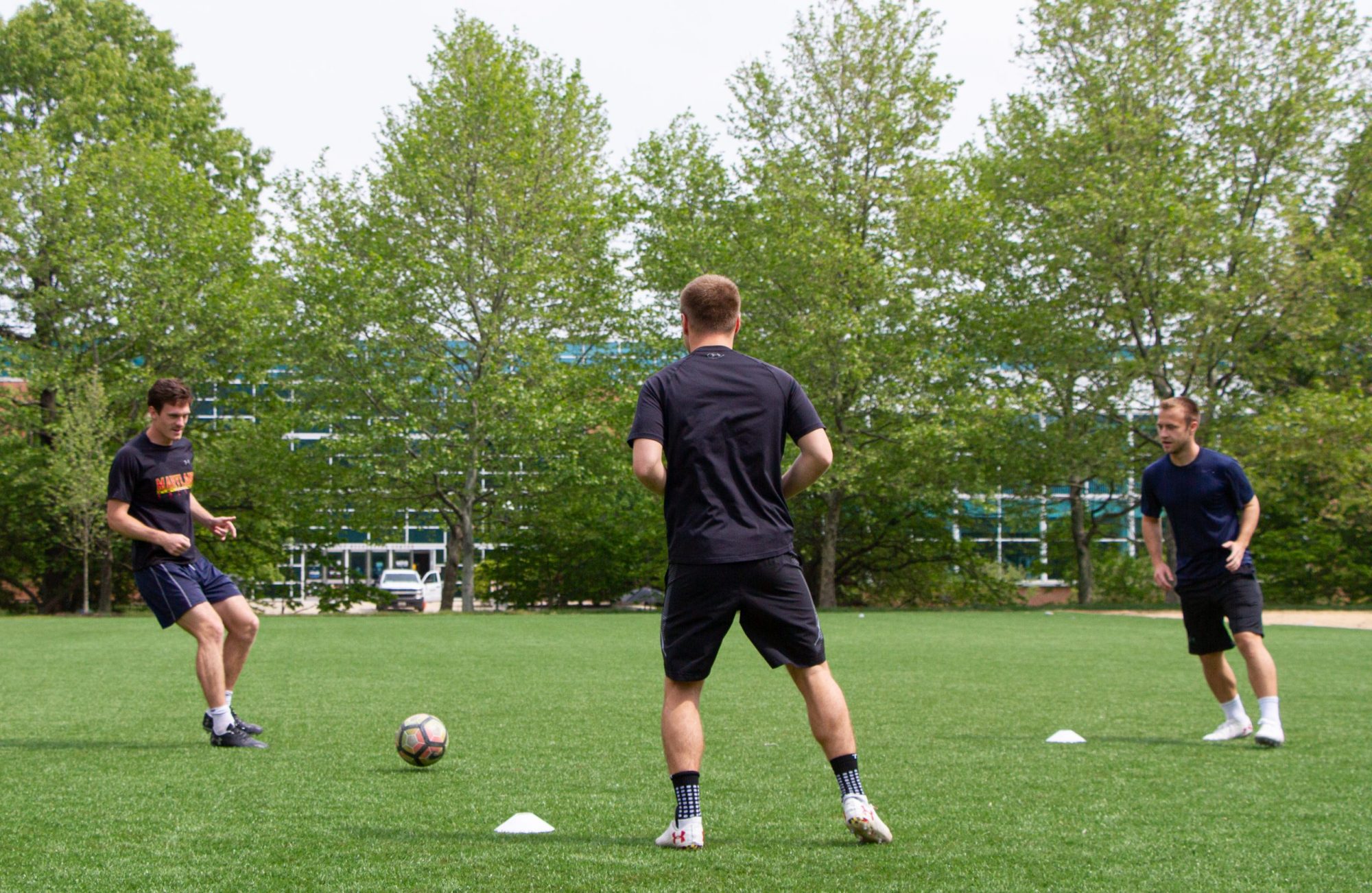 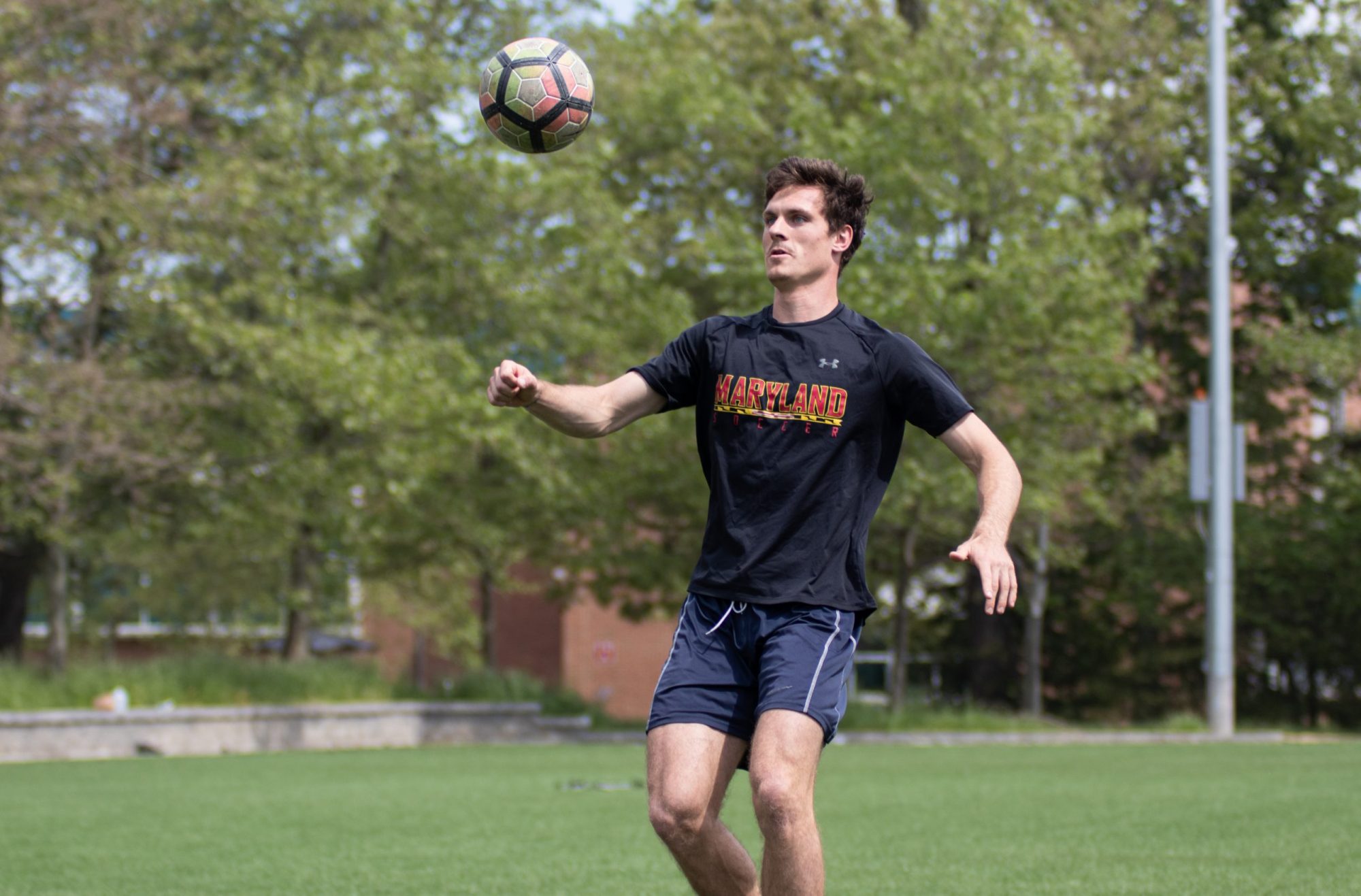 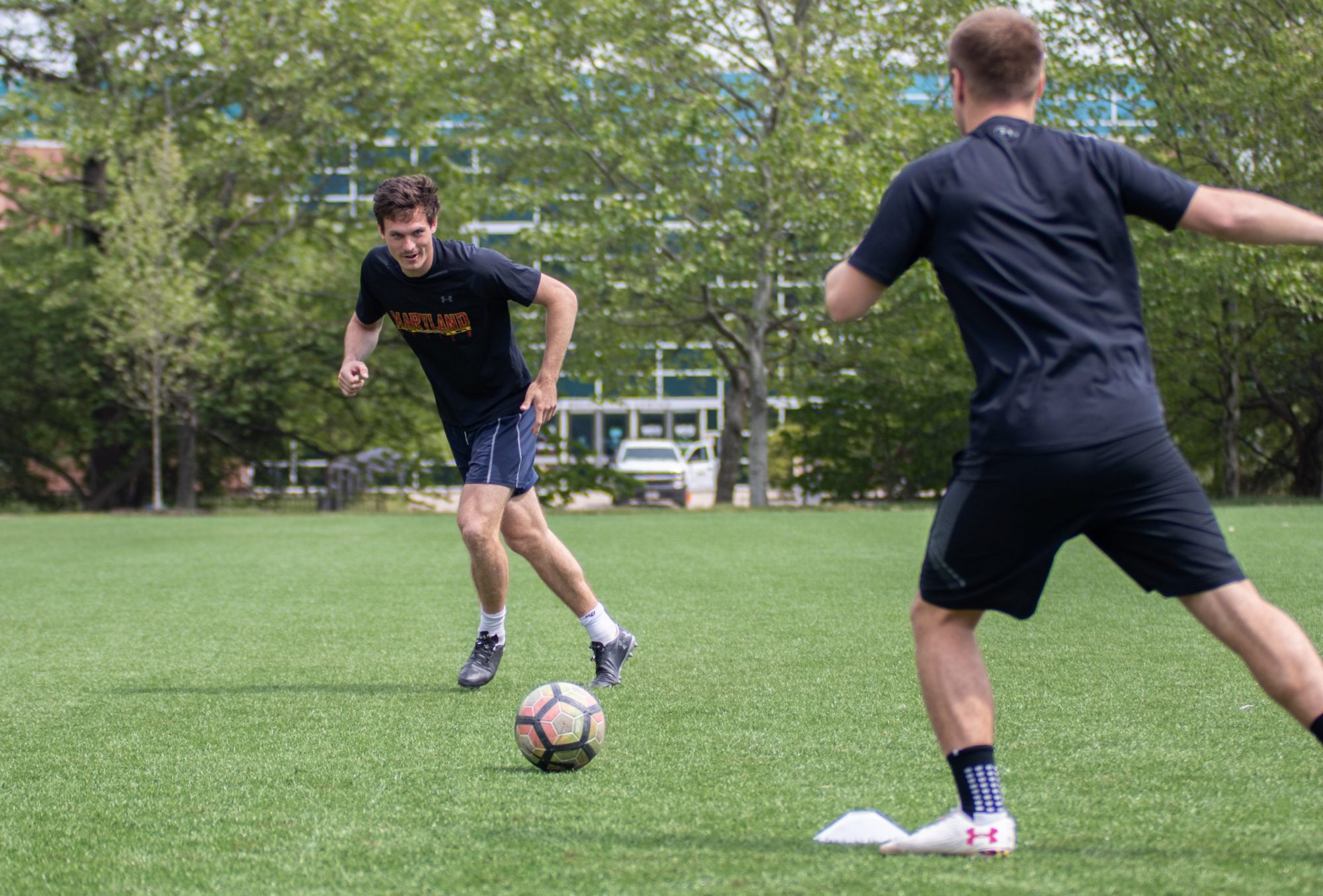 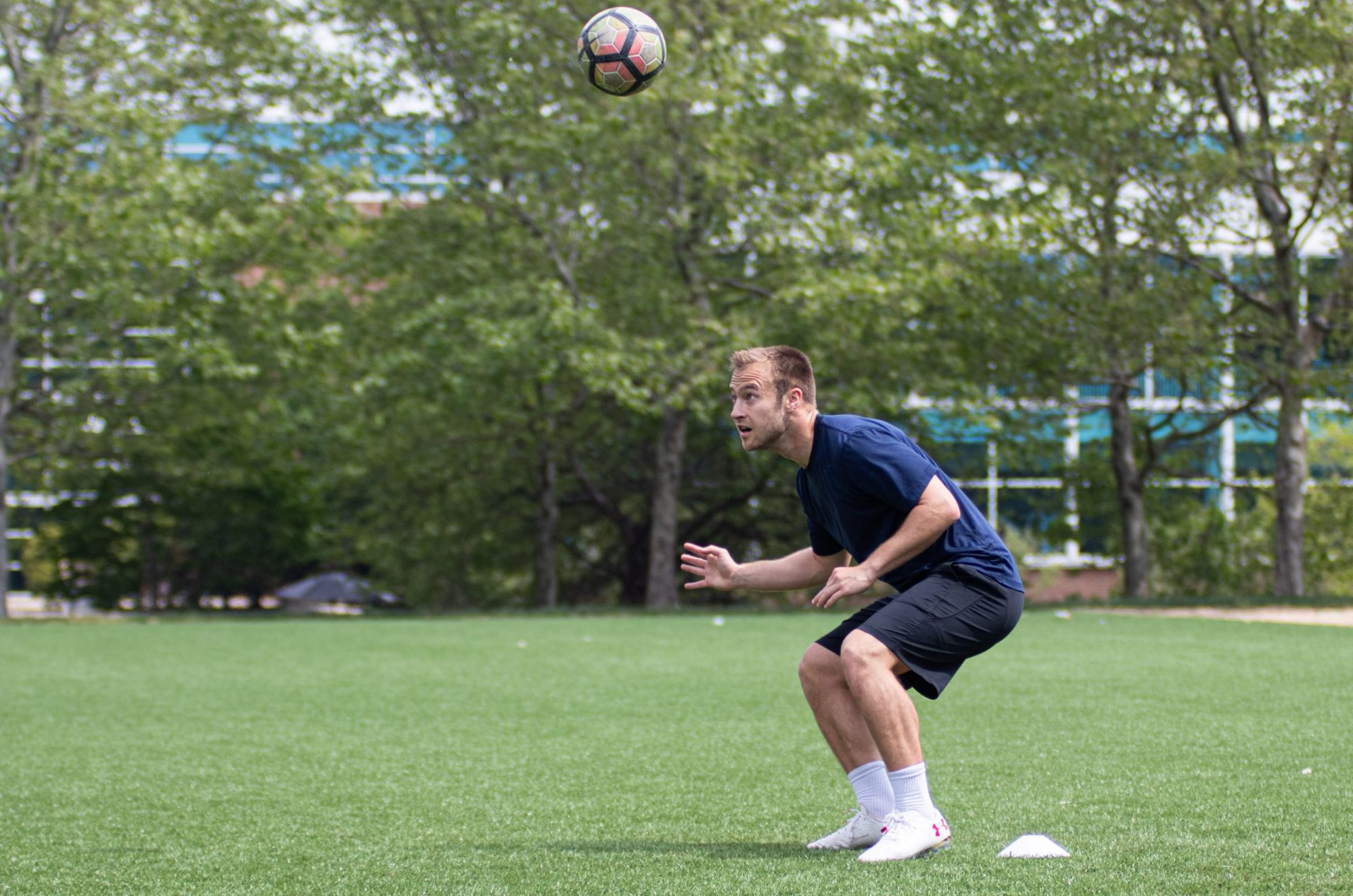 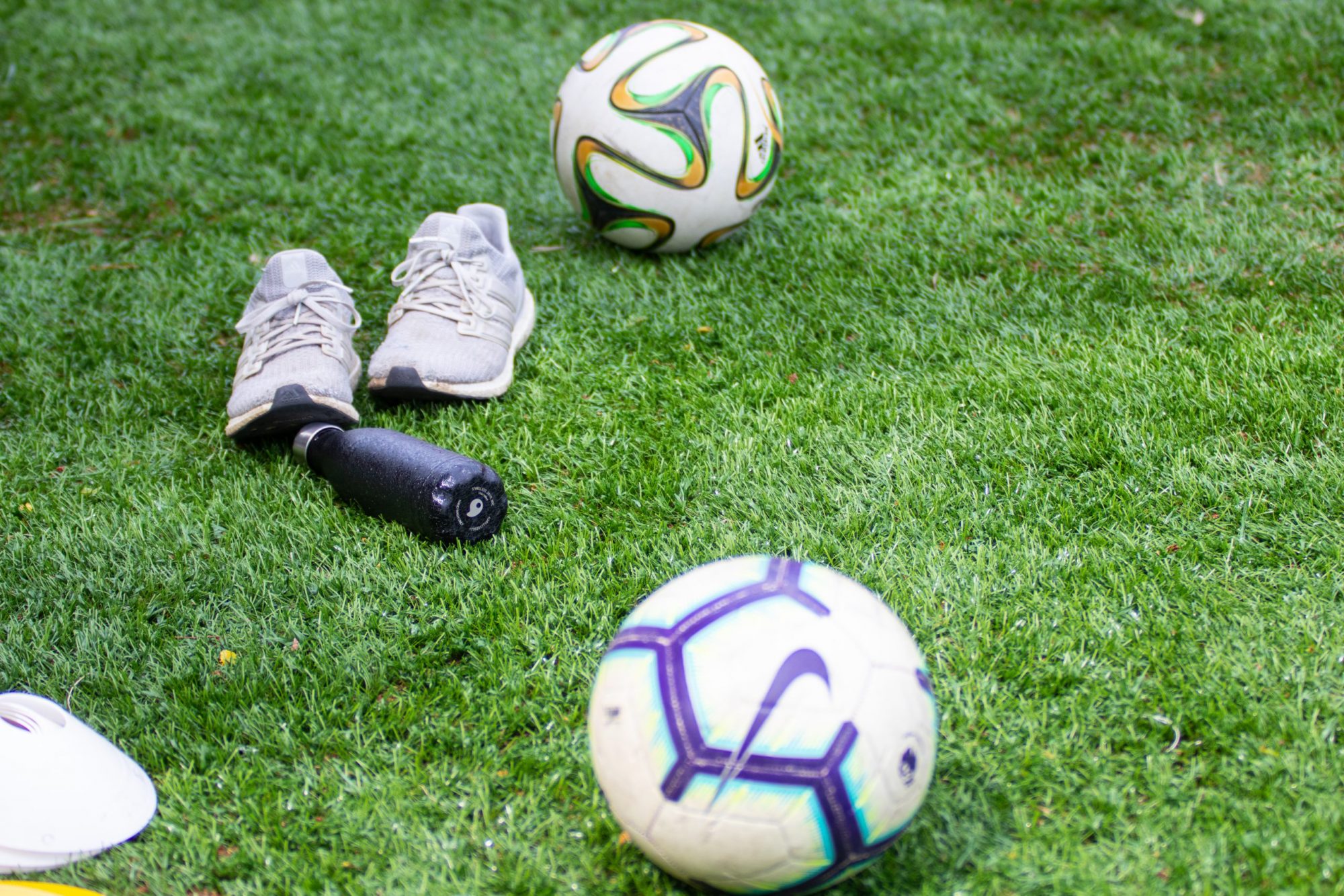 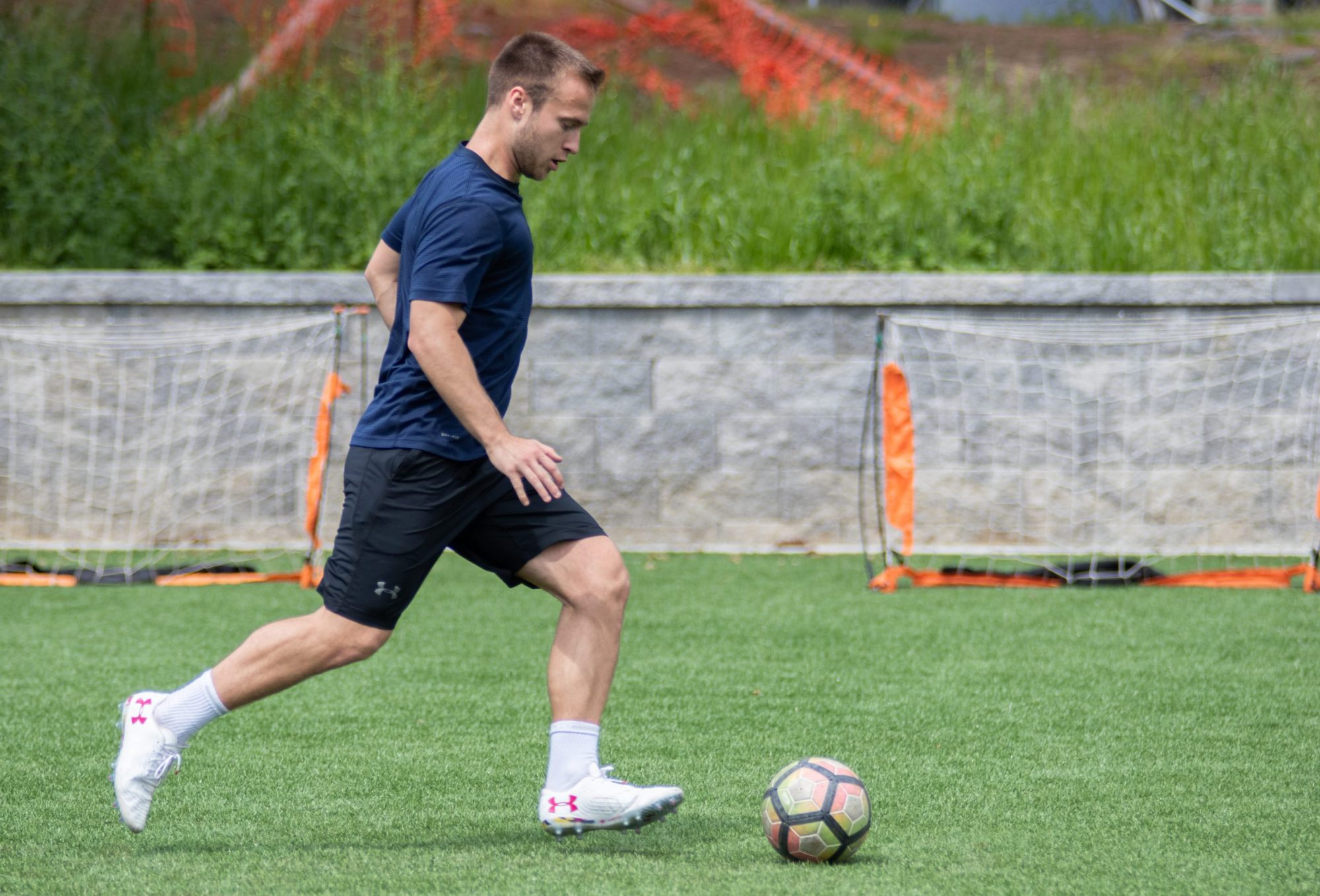 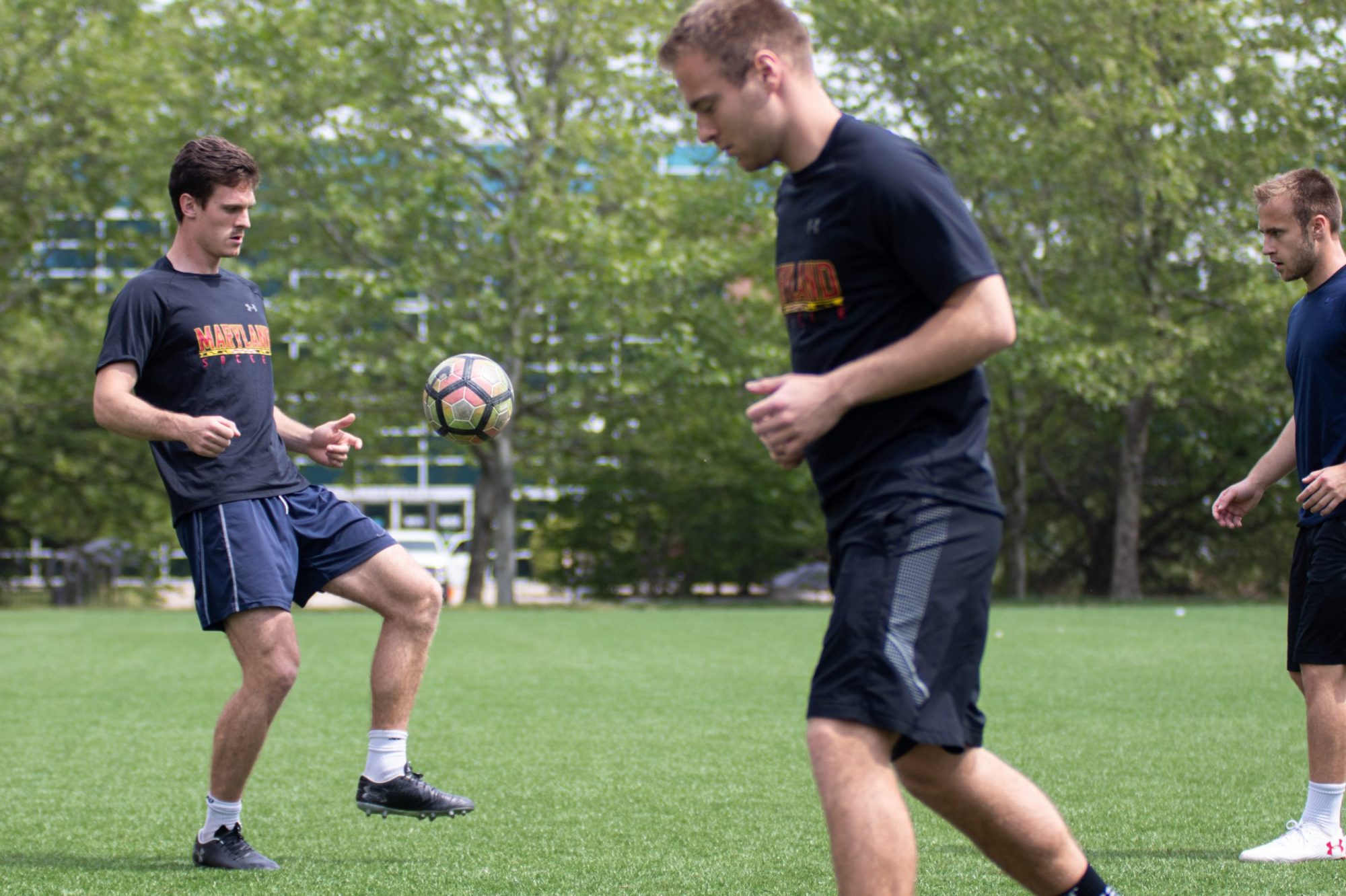 Many athletes have responded to Cirovski’s urges with zeal. But for two of Maryland’s biggest teams — men’s soccer and women’s lacrosse — adjustments have been particularly unique. The Terps have been using any facilities at their disposal — even incredibly basic ones — to prepare for a season that may never come.

For women’s lacrosse, that often means “wall ball,” a simple drill, used mostly for younger athletes in the early stages of learning the game. The trainee slings a lacrosse ball against any flat surface, aiming to catch the rebound. Although uncomplicated, it simulates multiplayer competition.

“I haven’t quite got it down to a science yet, but I’ll do wall ball drills as much as I can,” said defender and rising junior Laurie Bracey.

And for the Maryland soccer foursome, it’s a retreat to a field most often associated with pickup soccer — doing their best to turn a place for amateur enthusiasts into a collegiate-level training ground. While all four at least have teammates to work with, social distancing rules make for very limited options. There’s no contact, no real competitive edge. The Di Rosas, both starting defenders, can’t work on their tackling — leaving Matzelevich and Heitzmann, both attacking players, with few opportunities to take on opponents.

Still, Matzelevich has spent time as a youth soccer coach and has a plethora of gear as a result. Staples of the children’s game — cones, ladders and tiny PUGG-brand goals — have become crucial elements for improvement.

“We just try to do whatever we can to stay sharp,” Ben Di Rosa said. “But there’s not all that much that we can do.”

Most Terps meet a baseline of available facilities for improvement: Any open field is good enough for soccer, as is any flat surface for lacrosse. However, the minutiae of the sports isn’t so evenly distributed. While athletes can work on technical skills, other aspects of student-athlete life — such as strength and conditioning — are not so easily maintained.

Maryland, along with other colleges across the nation, is confronted with blockades in NCAA guidelines. The 20-hour rule — which lays out regulations for the number of hours a team can engage in “athletically related activities” — stipulates all official physical team activity must be supervised by an athletic department staff member. Under normal circumstances, such a rule would be of little consequence; teams rely on strength and conditioning coaches for tips on workout sessions.

However, with in-person supervision impossible, workouts and team physical activity are no longer an option. Although the NCAA has made changes to its regulations on virtual activity, such as allowing up to eight hours of virtual contact per week, student-athletes can no longer rely on the individual attention they once had.

“Our entire job is interacting with our athletes and being one-on-one in a very hands-on environment,” said Holly Frantz, the university’s strength and conditioning director for Olympic sports. “And all of those things have been removed.”

This has left Maryland coaches and athletes alike with a plethora of issues. Chief among them: the glaring discrepancy of available equipment. Frantz, responsible for overseeing 15 sports on campus, is faced with the challenge of helping athletes who might not have basic weight training equipment at home.

So, she’s had to get creative.

“I’ve done a couple videos where you might be lifting up a toolbox. They’re generally pretty heavy and you can pack it,” Frantz said. “So that could work.”

Other athletes have turned to gallons of milk or laundry detergent to complete basic routines. But even that’s not easy — largely because the 20-hour rule prevents Frantz and her fellow trainers from getting one-on-one work with athletes remotely. So, for most, a bit of improvisation is necessary.

“There’s not a lot of strength and conditioning things you can do on your own,” Bracey said.

Compared to others, Ben Di Rosa has a fairly easy go of things. He’s established a routine involving an exercise bike at home, some technical work in and lifting — albeit with a limited selection of dumbbells — to cap off the day.

Similarly, women’s lacrosse goalie Maddie McSally has the benefit of coming from a lacrosse family. Her brother, a midfielder at Clemson, regularly shoots on her — continuing a childhood rivalry and helping her improve. There are others, too, who have some equipment to surpass the basics. Matzelevich, at the very least, has tiny goals to shoot on. 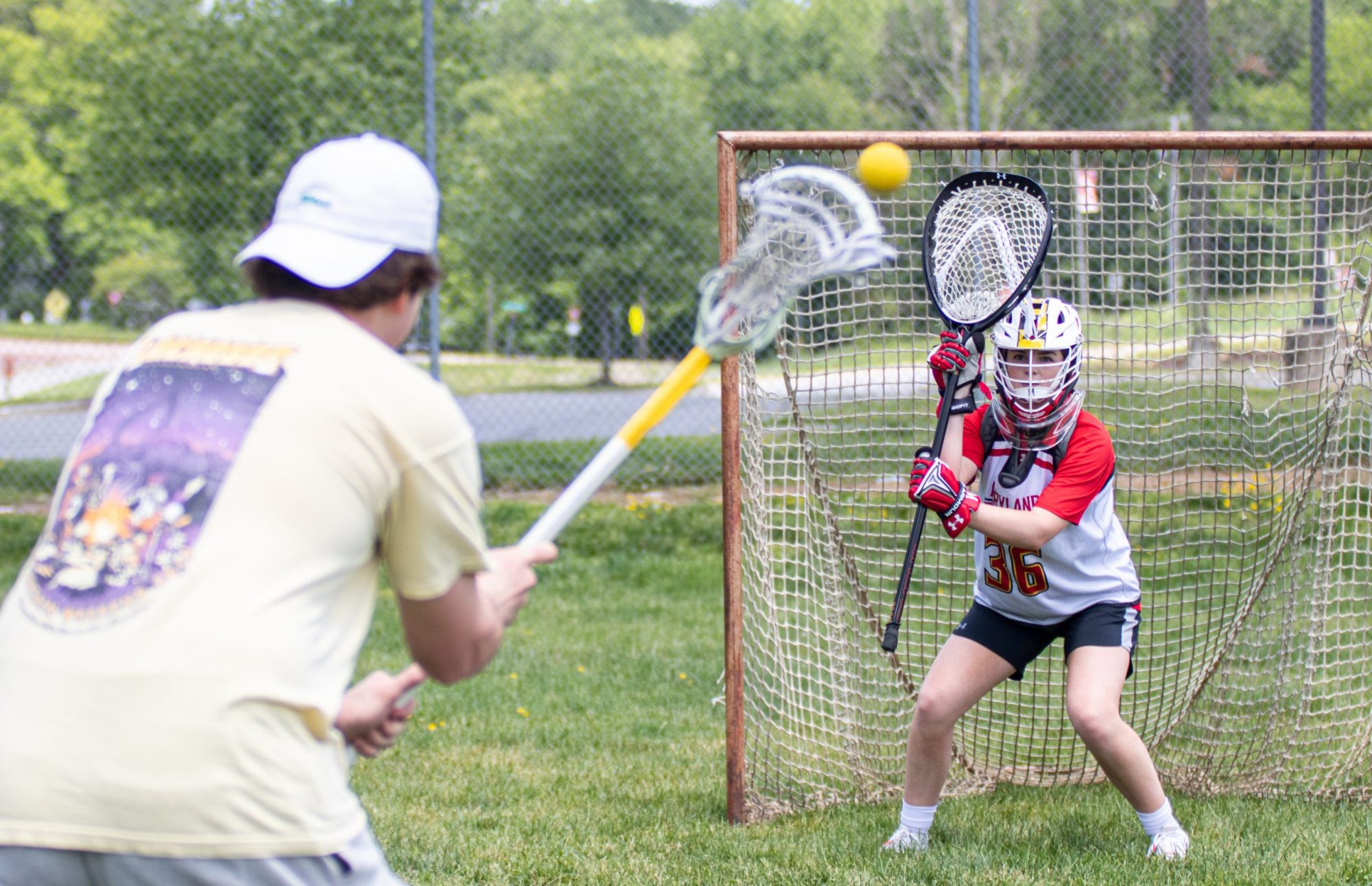 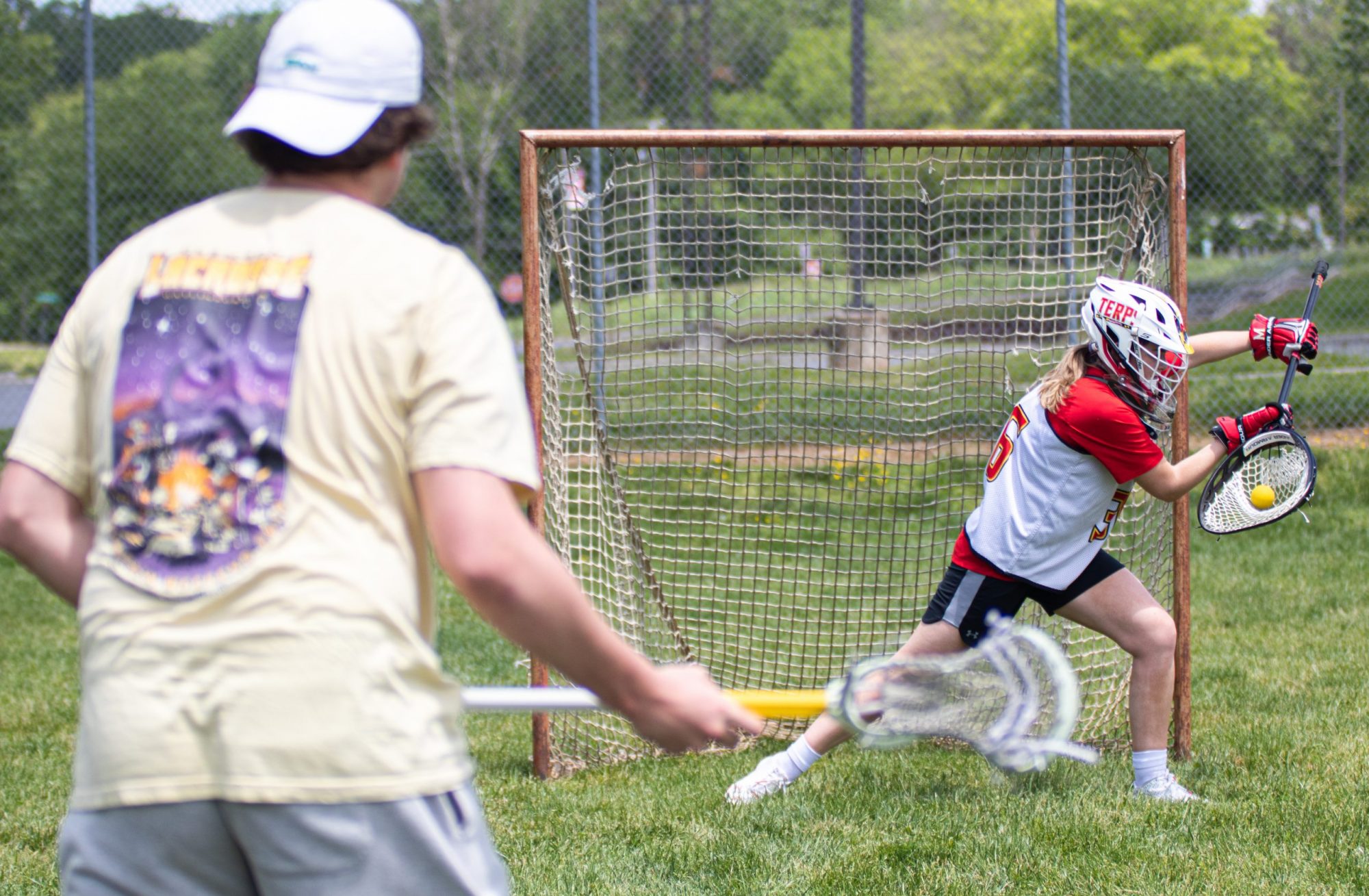 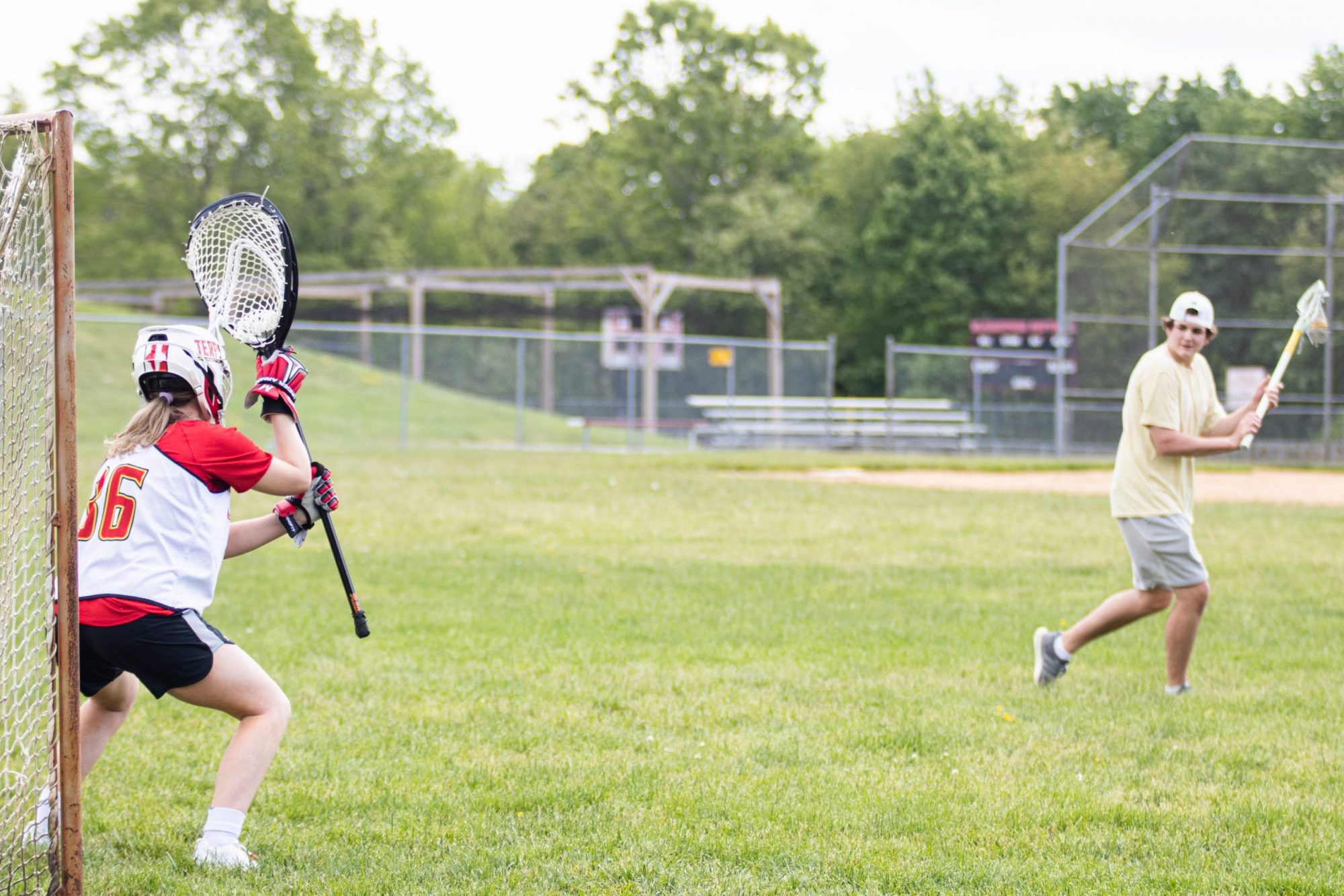 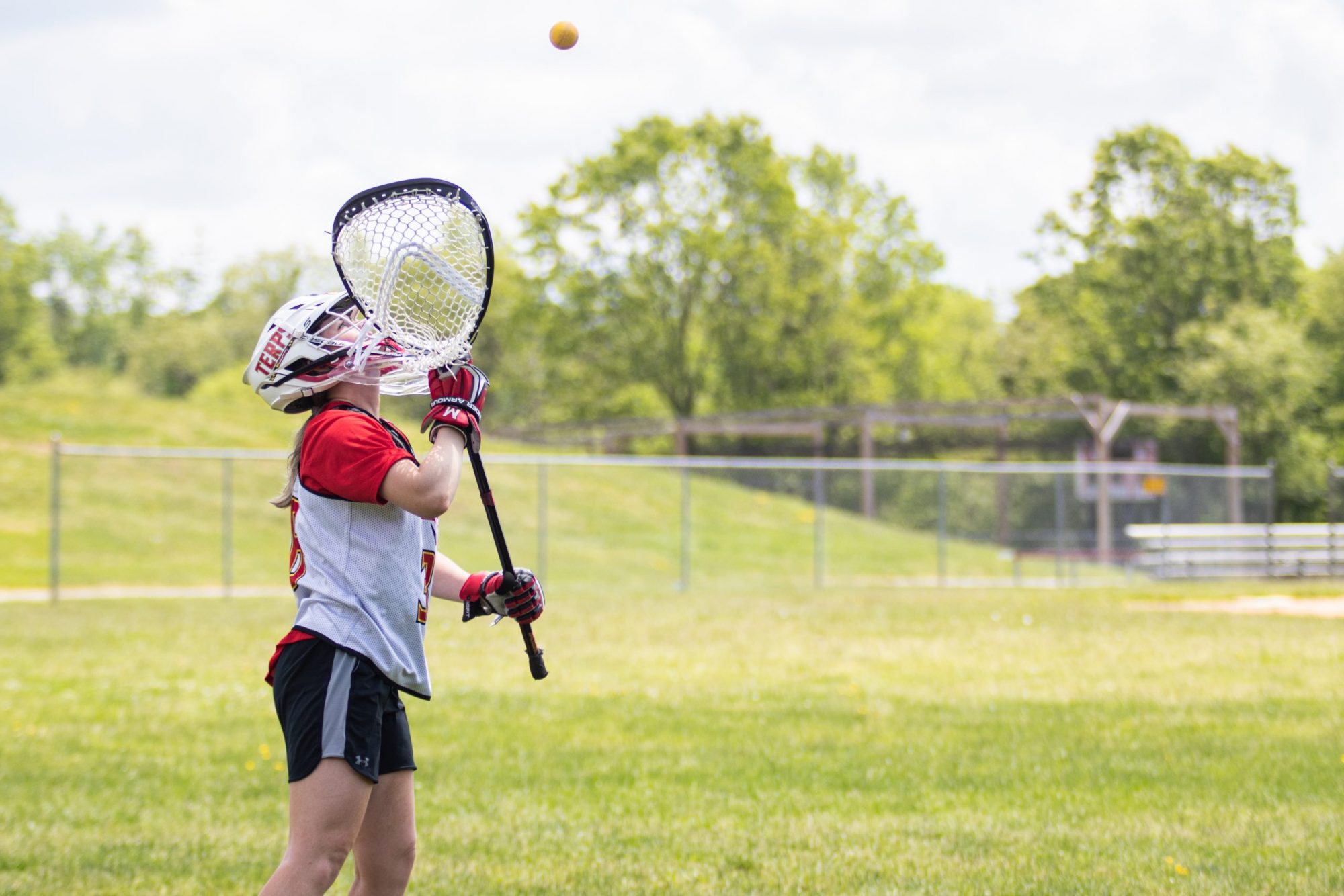 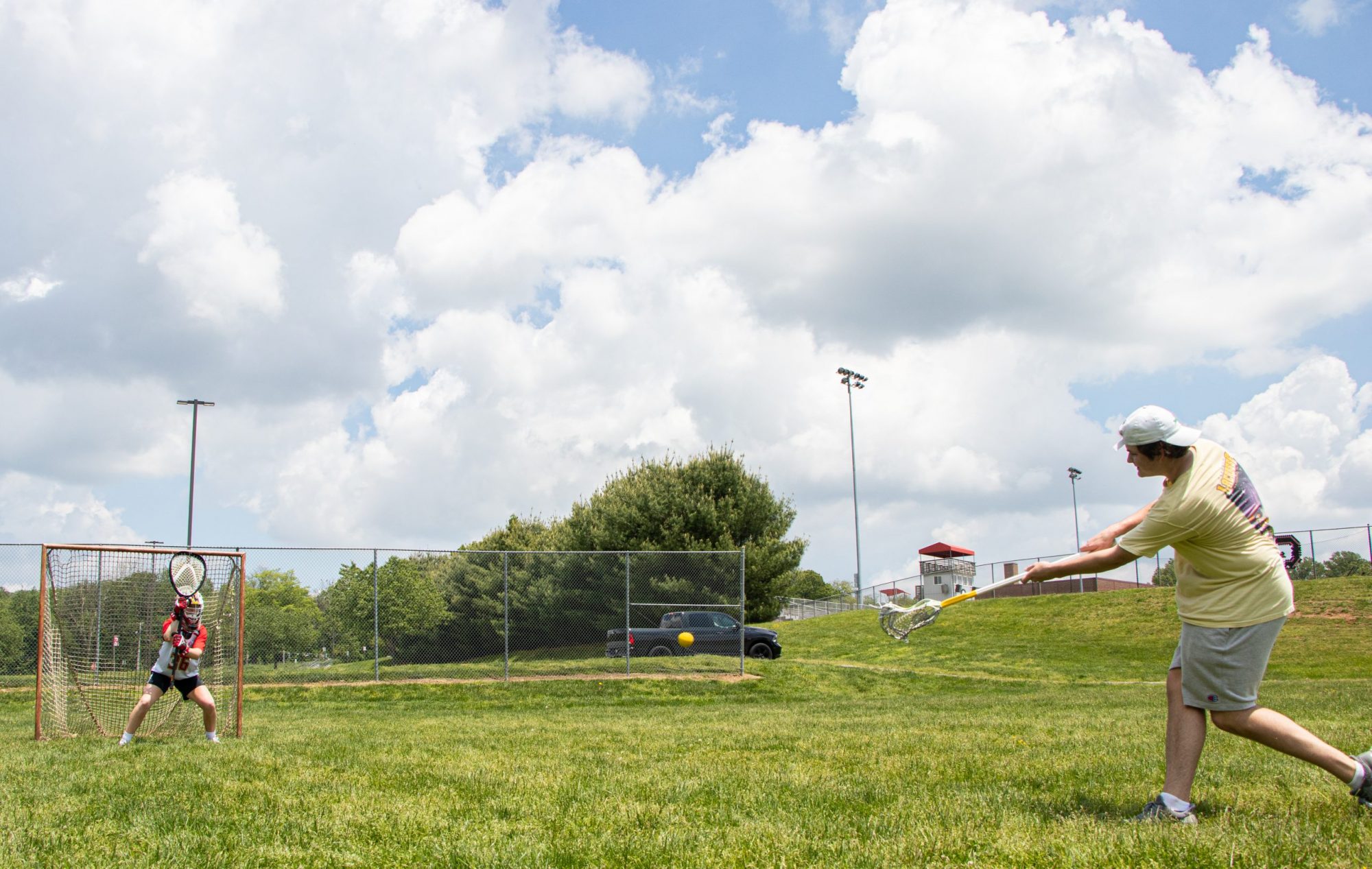 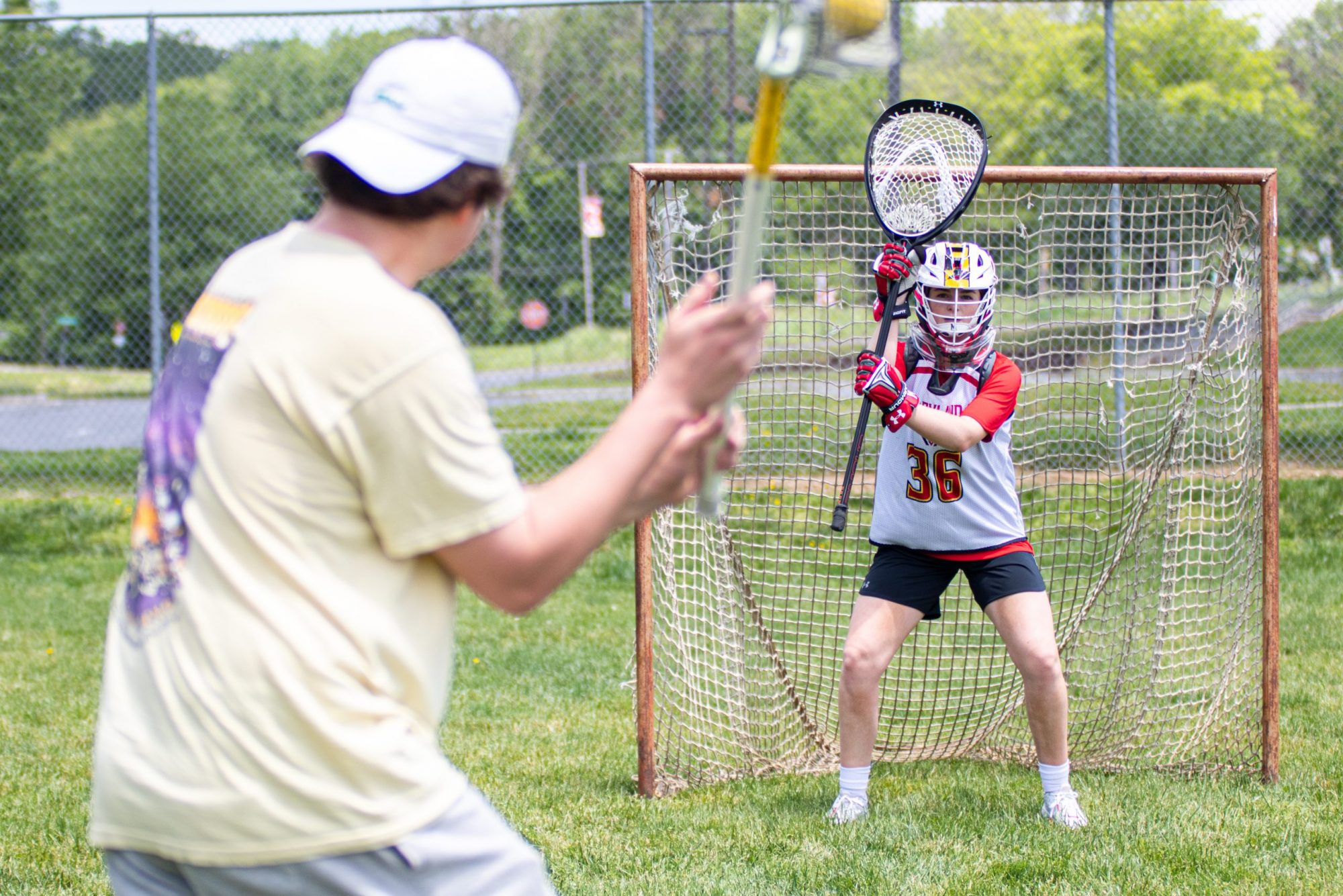 But, for the majority, that is not the case. Empty fields and stone surfaces are the best — and only — option for many of Maryland’s student-athletes. Thus, the last few months have been a time for working on the basics. Rather than sizing up a tough Big Ten slate, women’s lacrosse players are faced with concrete and a solitary stick. Rather than using state-of-the-art equipment and getting reps in spring games, men’s soccer players must use toolboxes and empty turf fields.

And in preparing for the season that may never come, with more questions than answers, the only option is to find a way to get by.

“I’ve been trying, at least as much as possible, to acknowledge that it all sucks,” Ben Di Rosa said. “It’s unfortunate — but … I can’t worry too much about what will happen.”